Inside Shahid Kapoor's Vacation: An Adorable Pic With Baby Misha

Shahid Kapoor is currently holidaying with his wife Mira Rajput and daughter Misha in an undisclosed location. The 36-year-old actor shared an adorable picture of Misha, also featuring himself on Instagram 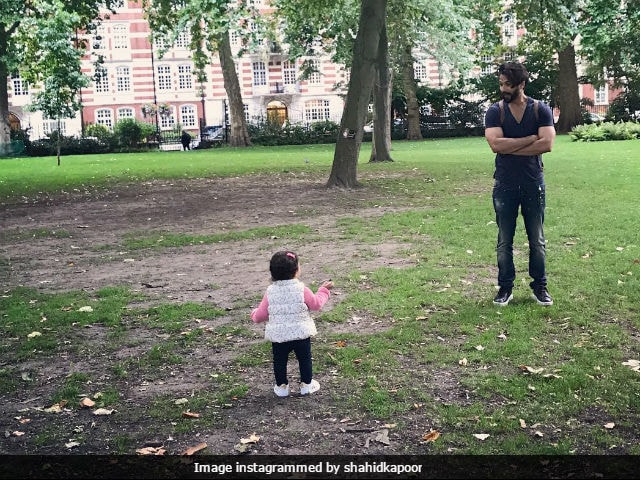 New Delhi: Actor Shahid Kapoor is currently enjoying a much-needed family vacation with his wife Mira Rajput and daughter Misha. The 36-year-old actor has been keeping his fans and followers updated by sharing pictures from his vacation diaries on social media. Today, Shahid delighted everyone by sharing an adorable picture of Misha, also featuring himself. In the picture, the Haider actor appears to be having a delightful conversation with his daughter. The photograph posted on Instagram has Misha's back to the camera. She is seen dressed in a pink sweater paired with blue pants and a white floral jacket. Shahid Kapoor is dressed in blue t-shirt paired with denims. The duo is seen enjoying their stroll in the park. Misha Kapoor will be celebrating her first birthday on August 26.

On Saturday, Shahid Kapoor posted a selfie with his wife Mira in which he is seen loving embracing her and kissing her on the cheeks, while Mira smiles for the camera. The picture has been captioned as, "My heart."

Last week, Shahid shared a picture on Instagram in which he is seen playing with his daughter. Misha can be seen holding a football, while Shahid helps her walk. "#playtime with lil missy," wrote the Vivah actor.

Promoted
Listen to the latest songs, only on JioSaavn.com
On the work front, Shahid Kapoor is training in sword fighting and martial arts for his role as Raja Ratan Singh in Padmavati, co -starring with Deepika Padukone and Ranveer Singh. Deepika plays the titular role in the film, while Ranveer will portray the role of Alauddin Khilji.

Padmavati, directed by Sanjay Leela Bhansali, is scheduled for release on November 17.