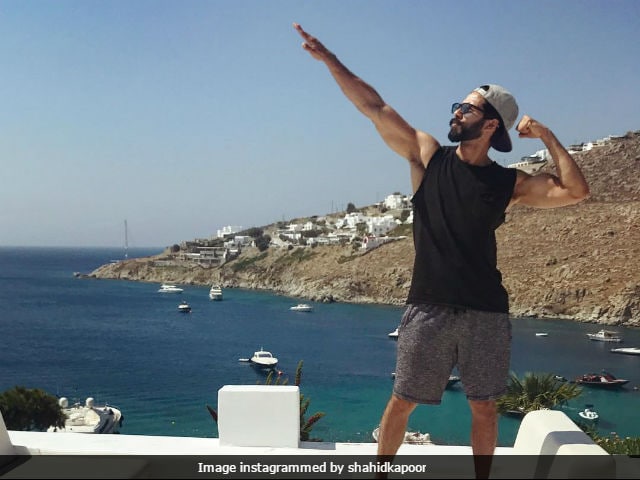 New Delhi: Actor Shahid Kapoor is currently on a vacation with wife Mira Rajput and daughter Misha in an undisclosed location. The 36-year-old actor has been keeping his fans and followers updated by sharing pictures from his vacation dairies on social media. Today, Shahid shared a picture in which he is seen showing off his biceps. In the backdrop, we can see a beach with several sailboats. Shahid is seen dressed in black vest paired with grey shorts and a cap. The image has no caption. On Wednesday, the Vivah actor shared a picture in which he was seen soaking in the sun. "#lazing," he wrote.

Shahid Kapoor's daughter Misha's first birthday is just a few days away (on August 26). On Monday, the Haider actor shared a picture on Instagram in which he is seen playing with his daughter. Misha can be seen holding a football, while Shahid helps her walk. The image has been captioned as, "#playtime with lil missy."

Last month, Misha travelled to New York with Shahid Kapoor and Mira Rajput. It was her first trip abroad. After attending the IIFA awards, Shahid and Mira took a brief trip with Misha.

Promoted
Listen to the latest songs, only on JioSaavn.com
Shahid Kapoor was last seen in Vishal Bhardwaj's Rangoon, co-starring Saif Ali Khan and Kangana Ranaut. The film failed to impress the critics as well as the audience and tanked at the box office.

Shahid Kapoor is currently filming Sanjay Leela Bhansali's Padmavati along with Ranveer Singh and Deepika Padukone. In the film, he will be seen portraying the role of Padmini's husband Ratan Singh.
Comments
Shahid KapoorPadmavatiRangoon