On Sunday night, the Rangoon actor Instagrammed a cuteness overloaded photograph of Misha, also featuring himself 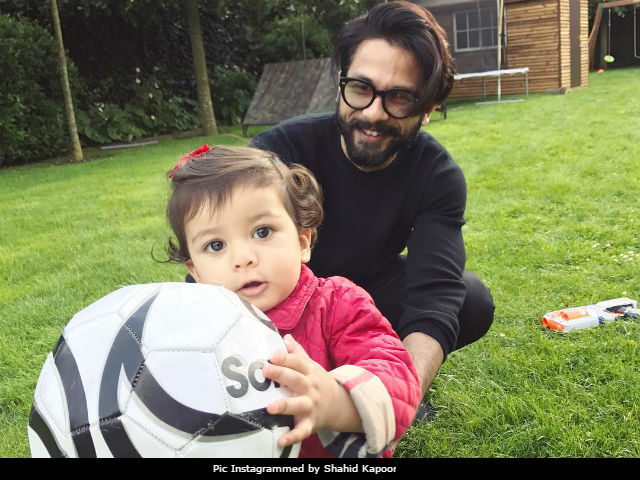 New Delhi: So, where is Shahid Kapoor holidaying with his family? We don't want to know as long as he Instagrams pictures like the new one with Misha. Misha Kapoor is just days away from celebrating her first birthday on August 26 and is currently enjoying a much-deserved family vacation with dad Shahid and mom Mira. On Sunday night, the Rangoon actor Instagrammed a cuteness overloaded photograph of Misha, also featuring himself. In the pic, Misha can be seen holding a football, the size of which appears to be a little bit of a concern for the baby girl, while Shahid helps her walk. Misha adorably stares into the camera (behind which is probably Mira) and all we can say is 'aww...'

The 36-year-old actor flew out from Mumbai with his family earlier this month, reportedly to celebrate Misha's first birthday abroad. On Instagram, he told us he's entering a no-work zone: "First family vacay. And we are off," he wrote.

First family vacay. And we are off.

Promoted
Listen to the latest songs, only on JioSaavn.com
Meanwhile, Misha has already started accompanying Shahid to his work-related trips. Last month, Shahid was in New York for the IIFA awards and Mira and Misha were also with him. After the IIFA schedule wrapped, Shahid was expected to take the mother-daughter duo out on a tour of the Big Apple and part of Misha's birthday celebrations have also reportedly taken place there. The Kapoor trio touched down in Mumbai on August 2, when it was speculated that Misha will blow out candles on her first birthday cake at home.

At work, Shahid Kapoor has been extensively training in sword fighting and martial arts for his role as Raja Ratan Singh in Sanjay Leela Bhansali's historical drama Padmavati. Shahid co-stars with Deepika Padukone, who plays the titular role, and Ranveer Singh, who features as Alauddin Khilji, in the movie.