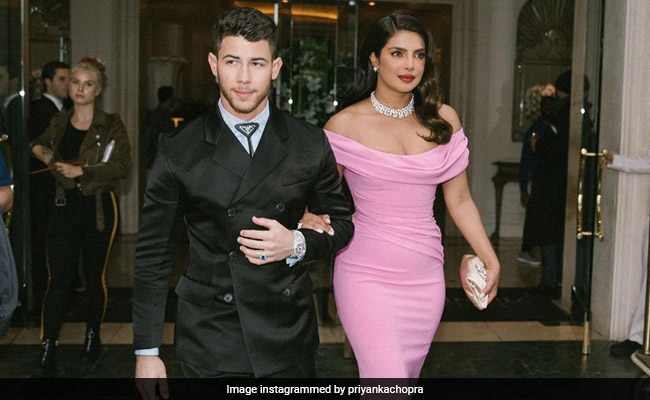 Priyanka Chopra and Nick Jonas never fail to give us couple goals and Nick Jonas' latest Instagram entry reminds us of just that. On Wednesday, the singer gave us a sneak peek of his and Priyanka Chopra's date night by sharing a video on his Instagram profile. In the video, Nick and Priyanka can be seen chilling together, wearing face masks. Nick says, "Date night.. Done right. Right babe?" and pans the camera towards Priyanka, to which she replies, "Right babe." The caption on Nick Jonas' post read: "Date night. Priyanka Chopra bro mask, wine and Tiktok."

Priyanka and Nick never shy away from expressing their love for each other. Nick Jonas, who presented an award at the Golden Globes this year with Priyanka Chopra, shared a video from the red carpet on his Instagram profile, in which he could be seen embracing Priyanka as she smiled with all her heart. In his post, Nick referred to Priyanka as his "beautiful date" and wrote: "My beautiful Golden Globes date."

Nick Jonas and Priyanka Chopra know how to set couple goals for every occasion. Take a look at some of the posts here:

2019 was one of the most incredible years of my life. I can't wait to see all that 2020 has to bring. Happy new year to everyone!

It's the happiest Christmas. From ours to yours. Merry Christmas a>

On the work front, Priyanka Chopra was last seen in Shonali Bose's The Sky Is Pink, which also starred Zaira Wasim. The actress' line-up of films includes Netflix's The White Tiger, co-starring Rajkummar Rao. She also has Netflix's superhero film We Can Be Heroes and a film with comedian Mindy Kaling in the pipeline. Nick Jonas was last seen in Jumanji: The Next Level.