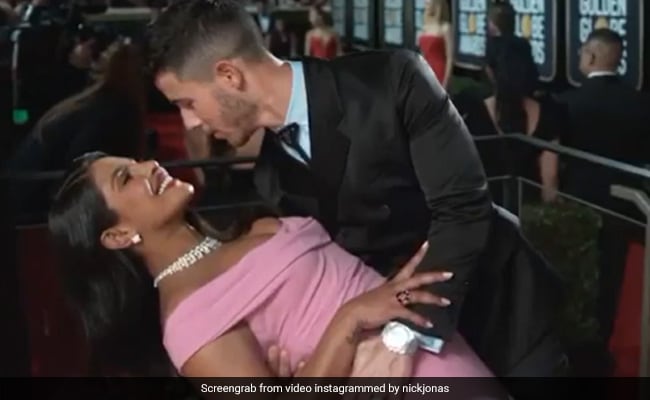 Priyanka Chopra and Nick Jonas, who attended the 77th Golden Globe Awards together on Monday morning as presenters surely made a head-turning appearance (but more on that later). This is the story of how Priyanka and Nick, stole our hearts with their PDA on the Golden Globes red carpet. Nick Jonas shared a video on his Instagram profile, in which he could be seen embracing Priyanka as she smiled with all her heart. In his post, Nick referred to Priyanka as his "beautiful date" and wrote: "My beautiful Golden Globes date."

Priyanka Chopra and Nick Jonas never shy away from expressing their love for each other on social media and at other public events. Remember how the couple sneaked in a kiss at the Jonas Brothers concert in Florida recently ? Or when the couple kissed on the Met Gala red carpet in 2019. This is what we are talking about:

Priyanka and Nick presented an award together at the 77th Golden Globes Award. Priyanka looked stunning as ever in a pink Cristina Ottaviano gown. She accessorised her look with a diamond neckpiece by Bvlgari and a pair of studs. Nick complemented Priyanka in a black tuxedo.

Take a look at the pictures from the red carpet here:

On the professional front, Priyanka Chopra was last seen in Shonali Bose's The Sky Is Pink, which also starred Zaira Wasim. The actress' line-up of films includes Netflix's The White Tiger, co-starring Rajkummar Rao. She also has Netflix's superhero film We Can Be Heroes and a film with comedian Mindy Kaling in the pipeline. Nick Jonas was last seen in Jumanji: The Next Level.