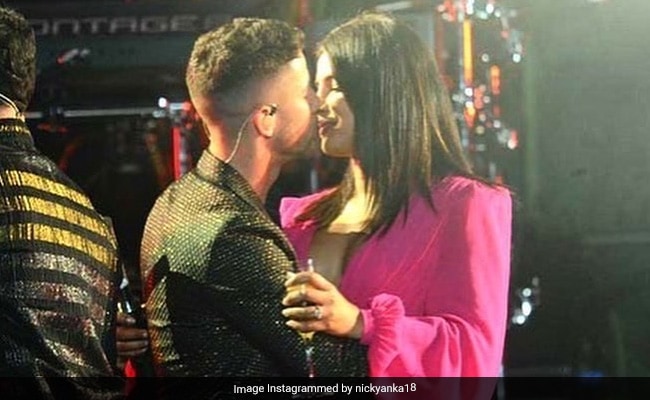 Leave it to Priyanka Chopra and Nick Jonas to set couple goals for every occasion. The couple, who attended the Jonas Brothers concert in Florida on Wednesday, shared a kiss on stage and have been trending for it big time. Nick Jonas, who was performing with his brothers and band members Joe and Kevin Jonas, took a moment off and kissed wife Priyanka Chopra on stage. Pictures from Priyanka and Nick's mid-concert PDA has been spreading on social media like wild fire. In the pictures, Nick can be seen dressed in a black suit while Priyanka can be seen dressed in a pink outfit. The pictures have been curated by several fan clubs on Instagram.

On New Year's Eve, Priyanka cheered for Nick at the Jonas Brothers concert in the Bahamas, where they were joined by Ayushmann Khurrana and Tahira Kashyap and their kids. Priyanka's brother Siddharth Chopra also joined them during the concert.

Priyanka Chopra and Nick Jonas ended the year by spending some quality time together. Check out their posts here:

Priyanka Chopra got married to Nick Jonas in Udaipur's Umaid Bhawan Palace in a Hindu and Christian ceremony in December 2018.

Priyanka Chopra was last seen in Shonali Bose's The Sky Is Pink, which also starred Zaira Wasim. The actress' line-up of films includes Netflix's The White Tiger, co-starring Rajkummar Rao. She also has Netflix's superhero film We Can Be Heroes and a film with comedian Mindy Kaling in the pipeline.