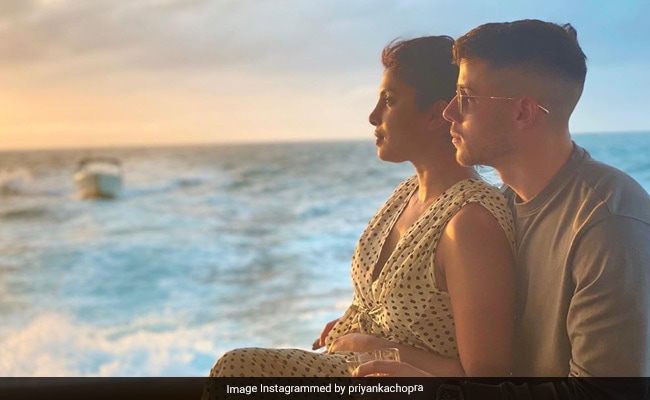 Snow-capped mountains - check, oceans - check. We wonder what Priyanka Chopra and Nick Jonas' next vacation stop would be. Just like most other star couples, Priyanka and Nick are also making the most of the holiday season by spending some quality time together. On Monday, the couple shared a lovely picture, in which they can be seen posing together next to what Nick described as an ocean in his caption. The couple did not reveal their holiday destination but we absolutely love the picture. "From the snow to the ocean. Life as it should be," Nick captioned the post. Priyanka also wrote "Life as it should be," in her post.

Priyanka Chopra and Nick Jonas celebrated Christmas at the Mammoth Mountain, California this year. The couple shared postcard-worthy pictures from the getaway. Nick gifted Priyanka a bat mobile for Christmas. "Santa drove in on my bat mobile! Aaaah! My husband knows me so well! Thank you baby. I love you," she wrote.

On the professional front, Priyanka Chopra was last seen in Shonali Bose's The Sky Is Pink, which also starred Zaira Wasim. The actress' line-up of films includes Netflix's The White Tiger, co-starring Rajkummar Rao. She also has Netflix's superhero film We Can Be Heroes and a film with comedian Mindy Kaling in the pipeline. Priyanka also dubbed for the Hindi rendition of Disney's Frozen 2, along with her cousin Parineeti Chopra.

Nick Jonas was last seen in Jumanji: The Next Level. The actor also starred in Midway this year.