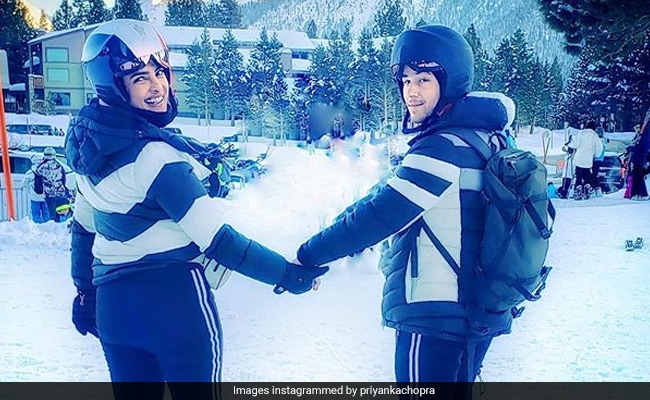 Priyanka Chopra and Nick Jonas wrapped their California vacation with a couple of postcard-worthy pics on Saturday. The duo have been enjoying their extended Christmas holiday at the mammoth mountain in California. Adding a new set of pictures to her vacation diaries, Priyanka proved that "twinning is winning." In case you are wondering how, the actress posted a photo of herself and her husband, in which the duo can be seen twinning in blue outfits. Sharing the photo, Priyanka captioned it: "Bye winter wonderland...you will be missed. See you in 2020 #twinning #twinningiswinning." She also shared a couple of photos of herself and her mean machine - the one Nick Jonas gave her as Christmas present.

In one of the pictures, Priyanka can be seen posing with friend Mubina Rattonsey and brother Siddharth Chopra. Take a look:

Me and my mean machine.. somewhere over the rainbow..

Priyanka Chopra and Nick Jonas have been sharing stunning pictures and videos from their vacation. Remember the one where Priyanka and Nick tried snow tubing? Or the one in which she rode the batmobile with Nick? If not, check them out here:

Nothing better than seeing her smile. #christmas

On the work front, Priyanka Chopra was last seen in Shonali Bose's The Sky Is Pink, in which she co-starred with Farhan Akhtar, Zaira Wasim and Rohit Saraf. She will next feature in a Hollywood's superhero film, as well as Netflix's White Tiger, in which she will share screen space with Rajkummar Rao. Priyanka's Marathi film Paani, produced by her Purple Pebble Pictures, recently won the National Award for Best Film On Environmental Conservation.