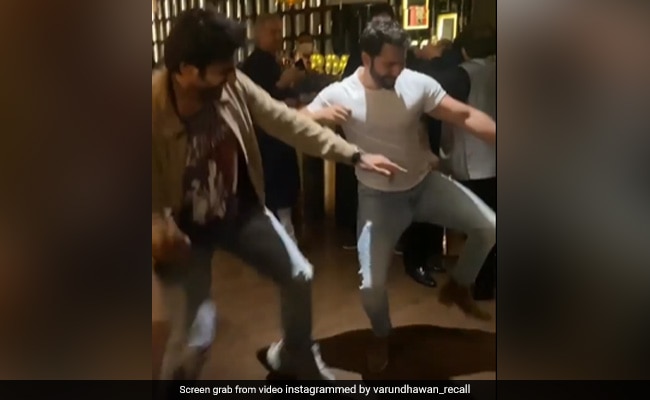 Dear readers, we have come across a fantastic dance video featuring Varun Dhawan and Kartik Aaryan on Instagram. And, it can be an ICYMI moment for most of you. The clip is from Varun's dad, director David Dhawan's birthday party. He turned 71 on August 16. The video opens with Varun and Kartik grooving to the party number Bom Diggy Diggy.The song is from Kartik's film Sonu Ke Titu Ki Sweety. In the background, we can hear the crowd cheering for the two. The clip was shared by a fan page.

For those who are feeling like revisiting the party number, we got your back. Oh yes, you can watch it here:

Well, we have some more inside pictures from David Dhawan's birthday bash. All thanks to Anupam Kher. The veteran actor has shared a bunch of pics from the party. And it is safe to say that it was a fun night. Chunky Panday, Shakti Kapoor, Satish Kaushik and Rajpal Yadav were present at the party. Along with the pictures, Anupam Kher wrote, “With birthday boy, David Dhawan and my dearest friends who I have spent some memorable times with. We are the best.”

Now, let us focus on Varun Dhawan and Kartik Aaryan's upcoming work lineup. Varun will next feature in Bawaal alongside Janhvi Kapoor. He also has Bhediya opposite Kriti Sanon in his kitty. Varun was last seen in the comedy family drama JugJugg Jeeyo. Anil Kapoor, Neetu Kapoor and Kiara Advani were also seen in lead roles in the Raj Mehta directorial.

Meanwhile, Kartik Aaryan, who made a lot of noise with Bhool Bhulaiyaa 2, is currently shooting for Shehzada with Kriti Sanon. He is also part of Hansal Mehta's Captain India.