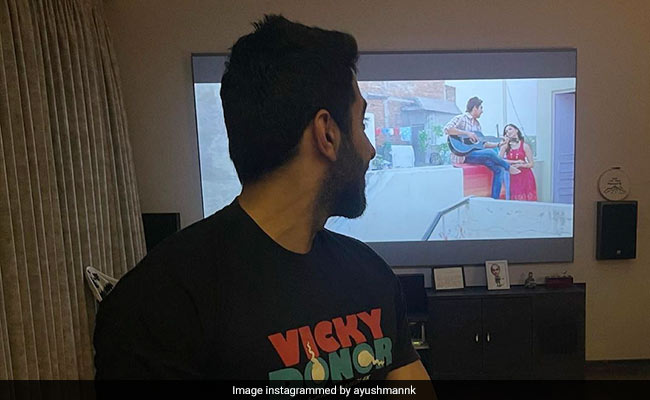 Vicky Donor completed nine years of its release in Bollywood on April 20. The 2012 film featured Ayushmann Khurrana and Yami Gautam  as leads. On Tuesday, Ayushmann, who made his debut with Vicky Donor along with his co-star Yami, took us back to the 2012 movie and wrote a heartwarming note on Instagram. Ayushmann posted a picture of himself on the platform in which he can be seen looking back. The actor is watching his song Paani Da Rang on TV. He is sporting a black T-shirt which reads Vicky Donor.

In his caption, Ayushmann shared how he composed the verse "kothe utte beh ke akhiyaan milaunde" of Paani Da Rang. The actor also recalled that he was experiencing "perpetual butterflies in the stomach" while filming his debut film. Ayushmann added that he also played cricket and football with Vicky Donor director Shoojit Sircar after finishing the shoot every day.

Ayushmann then thanked director Shoojit Sircar for being a "great mentor" and writer Juhi Chaturvedi for the script. He called Ronnie Lahiri, the "coolest producer" while thanking him. Ayushmann also thanked his "big bro" John Abraham, the co-producer of the 2012 movie. Apart from them, the actor thanked the entire cast of Shoojit Sircar's directorial venture including Yami Gautam, Annu Kapoor, Dolly Ahluwalia and others.

Ayushmann concluded his note by thanking the universe for his "big Bollywood dream".

His caption reads, "If I look back now, it seems like yesterday. The year 2012 and now it's 2021. Coincidentally they're the same jumbled digits. This shot reminds me of composing the line "kothe utte beh ke akhiyaan milaunde", I had written this verse of Paani Da Rang while I was shooting on this location, close to Rajouri Garden in Delhi. With perpetual butterflies in my stomach, I shot for this film, playing cricket or football with Shoojit da, post pack up, every single day. Thank you Shoojit da for being a great mentor. Thank you, Juhi for coming up with this benchmark of a script and altering the course of Hindi cinema. Thank you Ronnie da for being the coolest producer. And thank you big bro John Abraham for backing this gem. I owe it to you guys! Thank you, Yami, Annu ji, Dolly ji, Veera, Negi ji and the entire team. Thank you universe for realising my big Bollywood dream." 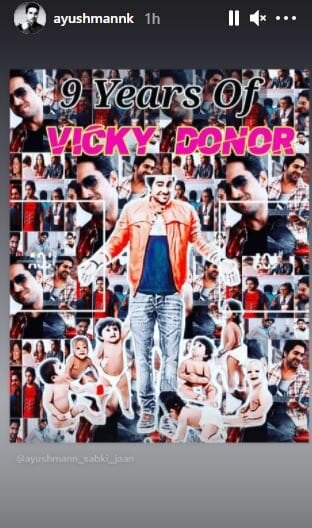 The plot of Vicky Donor was based on sperm donation and infertility. Ayushmann played the role of Vicky Arora, a sperm donor, Yami Gautam was cast as Aashima Roy, an accountant and his wife. Annu Kapoor played the role of Dr Baldev Chaddha, a fertility expert. Dolly Ahluwalia was cast as Vicky's mother Dolly. While Ayushmann was honoured with the Best Male Debut Filmfare Award for Vicky Donor in 2013, Yami was nominated in the category of Best Female Debut at the Filmfare Awards the same year.

Coming back to Ayushmann Khurrana, the actor has films like Anek and Chandigarh Kare Aashiqui coming up. He was last seen in Gulabo Sitabo opposite Amitabh Bachchan in 2020.