"We were some 8 kgs heavier and 8 times more stupid...(sic)," Ayushmann Khurrana's caption read 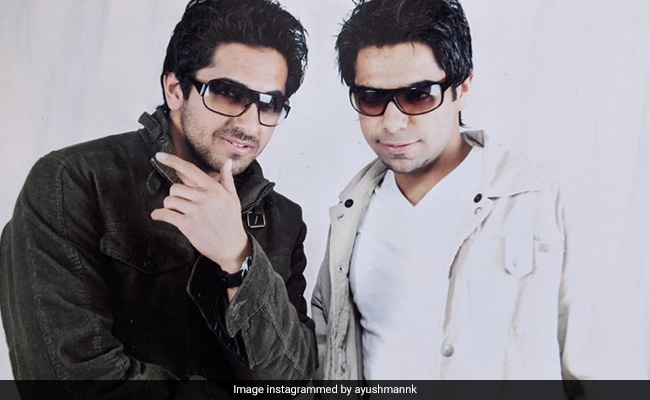 Weekend turned out to be better for Ayushmann Khurrana's fans as the actor treated his fans to a priceless memory on social media. On the occasion of World Sibling Day (Saturday), Ayushmann shared a throwback picture with his brother and actor Aparshakti Khurana on Instagram. The photo appears to have been clicked years before both Ayushmann and Aparshakti entered Bollywood. In the picture, the Khurana brothers can be seen posing for the camera. While Ayushmann opted for a black denim jacket, Aparshakti wore a neutral jacket. Both of them are also sporting black sunglasses. And we have to admit they look like "khaate-peete Punjabi ghar ke ladke".

We couldn't ignore Ayushmann's caption which is as quirky as it can be. The Vicky Donor actor wrote, "Khaate-peete Punjabi ghar ke Chandigarh ke ladke. Sire de fukre..."

Revisiting the past with brother Aparshakti, Ayushmann added, "...We were some 8 kgs heavier and 8 times more stupid. #WorldSiblingDay."

Ayushmann made his debut with Shoojit Sircar's Vicky Donor in 2012. He was paired opposite Yami Gautam, who also made her debut with the 2012 film. He was last seen in Gulabo Sitabo alongside Amitabh Bachchan in 2020. Ayushmann now has Chandigarh Kare Aashiqui and Anek coming up.

Aparshakti, on the other hand, made his debut with Nitesh Tiwari's 2016 film Dangal. He has worked in films such as Saat Uchakkey, Badrinath Ki Dulhania, Happy Phirr Bhag Jayegi, Stree, Luka Chuppi, Bala and Pati Patni Aur Woh including others. Aparshakti was last seen in Varun Dhawan and Shraddha Kapoor's 2020 film Street Dancer 3D. He is now gearing up for the upcoming movie Helmet in which the actor will share screen space with Pranutan.

While the Khurana brothers have worked in several films separately, they are yet to share screen space in a movie. For those of you who don't know, both Ayushmann and Aparshakti are former radio jockeys.