Ayushmann Khurrana on working with Amitabh Bachchan: "I'm excited to start this journey" 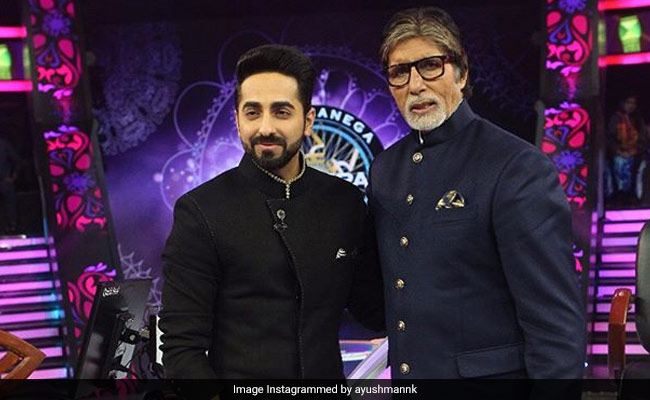 Ayushmann Khurrana with Big B on the sets of Kaun Banega Crorepati. (Image courtesy: Instagram)

Amitabh Bachchan and Ayushmann Khurrana are set to star in Shoojit Sircar's next cGulabo Sitabo. This is the first time Amitabh Bachchan and Ayushmann Khurrana will work together in a film. The film, set in Lucknow, is billed as a quirky family comedy, written by Shoojit Sircar's longtime collaborator Juhi Chaturvedi. They have worked together on Vicky Donor, Piku and his most recent October. Shoojit said he and Juhi Chaturvedi were working on this script for some time and are glad everything fell in place with the two actors.

"... As we all know when Juhi comes up with a story it has her trademark quirk in it. As soon as I read it I was extremely excited and shared it with Ronnie, my dear friend and producer and to both Mr Bachchan and Ayushmann at the same time. I thought it would take some time to develop and proceed but everyone including the duo were so enthusiastic to do this script, that they figured their dates and here we are, planning to release it this year," the director said in a statement.

Gulabo Sitabo is a fun colloquial metaphor used by the locals, he added.

Ayushmann Khurrana said it is a dream come true for him to be finally working with Mr Bachchan, his idol. "It's really a surreal moment for me. It's a moment that I have always wished for ever since the time I wanted to become an actor but now that I'm going to finally act with him, I think it's going to be extremely overwhelming for me," he said.

"It's a real honour for me as an actor to be able to go through this experience and an incredibly proud moment as an artiste that Shoojit da thought of taking me in this film that has an icon like Bachchan sir. I'm excited to start this journey and become a better actor in the process," the Badhaai Ho star said.

@amitabhbachchan sir aur meri Jodi, ekdum #GulaboSitabo si hogi Really excited to be a part of this project by my mentor @shoojitsircar! In cinemas this November. @juhic3 @ronnie.lahiri @filmsrisingsun #SheelKumar

Ayushmann Khurrana teams up with Shoojit Sircar after the 2012 hit Vicky Donor, which was the actor's debut in Bollywood. Shoojit Sircar previously directed Mr Bachchan in Piku.

Produced by Ronnie Lahiri and Sheel Kumar, Gulabo Sitabo is slated to be released in November 2019.