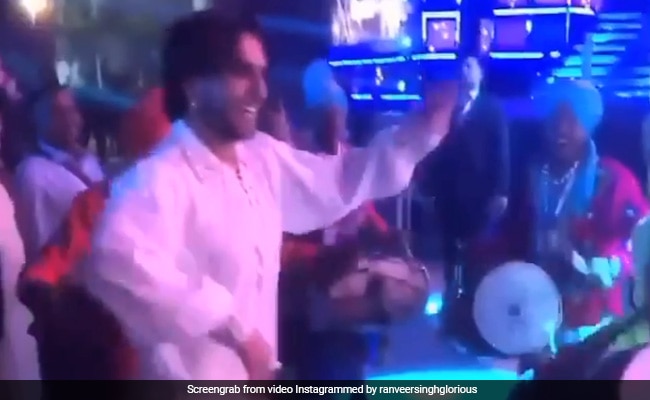 Filmfare Awards was a starry affair on Saturday evening and Ranveer Singh made the most out of his time at event. A video surfaced on Ranveer's fanpages. The Gully Boy actor was recorded dancing with Ayushmann Khurrana. Their power-packed performance will help you clear all your blues. Ranveer and Ayushmann got close to the main stage before the show and grooved to the bhangra beats. A few people wearing turbans played the Punjabi dhol encircling Ranveer and Ayushmann. Background dancers and other audiences gathered to watch the duo dance. Ranveer and Ayushmann's energy before the show seemed to be too high.

Take a look at this video:

Ranveer Singh won the Best Actor award for his 2019 film Gully Boy. The film has received maximum number of awards at the Filmfare Awards with a total of 13 trophies. He shared his happiness with this post on Instagram:

Ranveer Singh and Ayushmann Khurrana boarded the same flight on Friday. They were accompanied by Ayushmann's wife Tahira Kashyap, Karan Johar, Vicky Kaushal and Kartik Aaryan. KJo posted a video on Instagram, which he captioned, "It's time to toodles again!"

On the work front, Ranveer Singh will be seen in Kabir Khan's '83. The 34-year-old actor will also feature in Takht which will be directed by Karan Johar. Ranveer Singh has also wrapped shooting for his upcoming film Jayeshbhai Jordaar. On the other hand, Ayushmann Khurrana is busy with the promotions of upcoming film Shubh Mangal Zyada Saavdhan, wherein he co-stars Jitendra Kumar and plays the role of a gay couple. The film is scheduled to release on February 21.