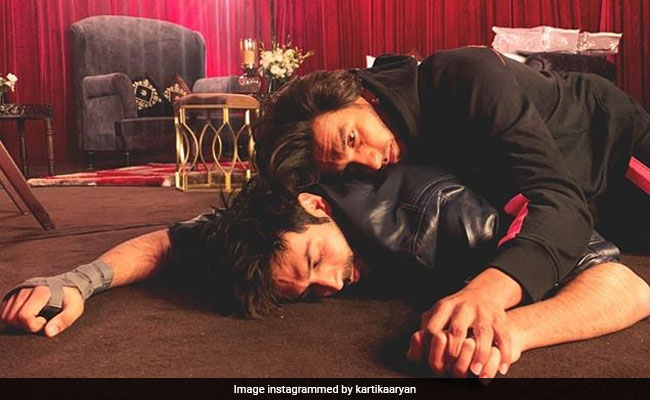 Ahead of the 65th Filmfare Awards, we got a glimpse of Ranveer Singh and Kartik Aaryan's "Love Aaj Kal" moment. The Pati Patni Aur Woh actor shared a BTS photo from the Filmfare Awards and gave himself and Ranveer a hilarious yet cute nickname - "Rantik." In the picture, Ranveer and Kartik can be seen recreating one of the iconic scenes from the latter's recently-released film Love Aaj Kal, in which Kartik shared screen space with Sara Ali Khan. Sharing the photo, Kartik wrote: "Announcing #LoveAajKal 2030 with Ranveer Singh" and accompanied the post with the hashtag #Rantik. Take a look:

For those who don't know, Ranveer has also worked with Sara Ali Khan in the 2018 film Simmba and just like Kartik, he also frequently teases her on social media.

Take a look at Kartik Aaryan's latest post, which features him having some fun with Ranveer between their rehearsals:

In his previous posts, Kartik Aaryan shared glimpses from his rehearsals, in which he could be seen dancing to the track Haan Main Galat from his film Love Aaj Kal. He wrote #PungiDance in the caption of one of the posts, making a reference to the trending Pungi challenge that he started last month to promote his film. Check it out:

The 65th Filmfare Awards will be held tonight in Assam. The venue for the awards is the Sarusajai Stadium in Guwahati. Karan Johar and Vicky Kaushal will host the awards. Other than Kartik, celebrities such as Ranveer Singh, Madhuri Dixit and Ayushmann Khurrana will also set the stage on fire at the awards tonight.