'Fawad Khan, Too Good.' The Internet Absolutely Loves His Song Satrangi From Pepsi Battle Of The Bands

After Sunday's performance, fans are super thrilled about Fawad's comeback as a musician 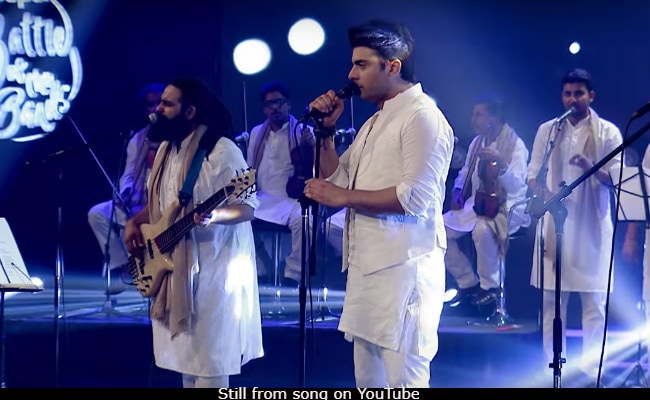 So, Fawad Khan performed with his band Entity Paradigm on the finale of Pepsi Battle Of The Bands, a Pakisatani music reality show and folks on the Internet are absolutely floored. For the uninitiated, Fawad Khan's band released their maiden album on the first season of the show in 2002 and they eventually clinched the second spot at the finale. Entity Paradigm also made an appearance in the second season of Pepsi Battle Of The Bands last year. After Sunday's performance, fans are super thrilled about Fawad's comeback as a musician. Fawad performed a rehashed version of Satrangi, which was originally written in 2008 and also the title song of 2008's Pakistani series of the same name with Fawad in the lead.

Doing what he does best, @_fawadakhan_ is bewitching our hearts performing "Satrangi" with the biggest orchestra in the history of #PepsiBattleoftheBands. pic.twitter.com/S4mtVgiZe8

"The singer, composer, writer and musician in Fawad is still alive," read a comment on Pepsi Battle Of The Bands's YouTube channel while another one added: "Last season EP nailed it with Hamesha and now Satrangi. Fawad never disappoints!" A fan wrote: "Fawad that music was at another level," while many were made nostalgic: "Watched finale only for this fine performance, nostalgic." Comments like "Amazing performance", "awesome", "This is so good" and "Why so hot and talented" flooded the YouTube feed and also his Instagram. The general feeling was summed up with this comment: "What is that this guy can't do? I mean how can someone be that amazing?"

Watch Satrangi from Pepsi Battle Of The Bands. Shared on Fawad's Instagram, the song has over 204,964 views in less than a day:

Formed in 2000, the other members of Entity Paradigm include names like Ahmed Ali Butt, Zulfiqar Jabbar Khan, Salman Albert, Hassaan Khalid and Sajjad Ali Khan. On the work front, Fawad Khan was last seen in Bollywood's Ae Dil Hai Mushkil after which he featured in a cameo in Jawani Phir Nahi Ani 2.