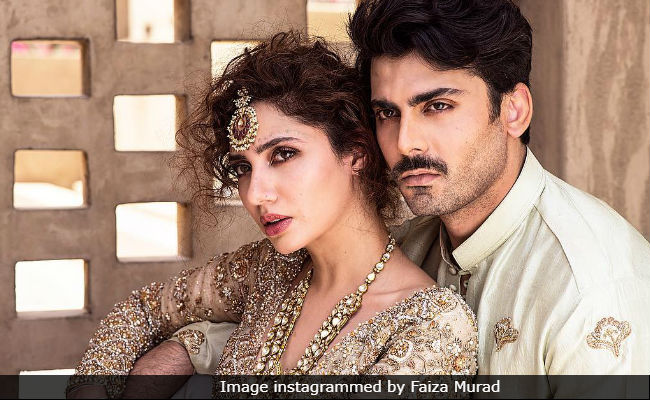 New Delhi: Pakistani actors Fawad Khan and Mahira Khan make a beautiful pair and the actor's wife Sadaf is not oblivious to that fact. Sadaf chose the Humsafar co-stars to showcase her latest wedding couture designs published in a magazine, which will be the Bible for brides-to-be this wedding season in Pakistan. Sadaf owns fashion label Sadaf Fawad Khan, which she started with her husband in 2012. This year, Fawad and Mahira covered a bridal magazine, dressed in complementary golden outfits. Mahira wore kundan jewellery with the embellished outfit while we can't get over Fawad Khan's mustachioed look.

Here's a photo from the magazine:

Fawad Khan and Mahira's onscreen jodi stops traffic in Pakistan as well as in India. Recently Mahira attended Sadaf's surprise birthday party (planned by Fawad, of course) and before that their reunion on the sidelines of Pakistan Super League (PSL, the Pakistani version of Indian Premier League) moved the Internet.

Fawad Khan and Mahira Khan became household names after their show Humsafar aired in India. After the success of the show, Fawad debuted in Bollywood in Khoobsurat (2014) opposite Sonam Kapoor while Mahira was seen opposite Shah Rukh Khan in Raees (2016).

Promoted
Listen to the latest songs, only on JioSaavn.com
Earlier this week, pictures from Fawad Khan's sister Sana's engagement hit the Internet and became viral instantly. Fawad and Sadaf posed with the bride to be, who looked resplendent.