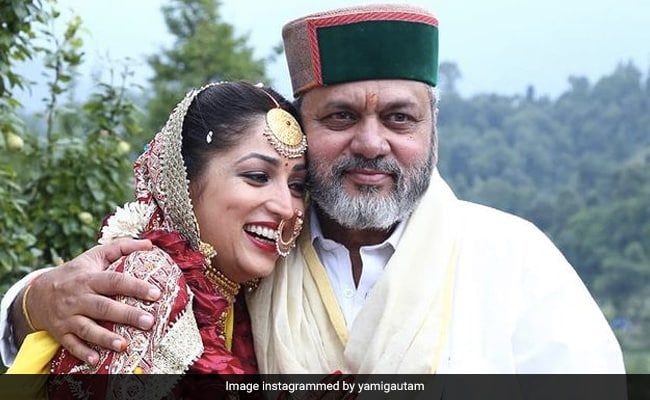 Yami Gautam handpicked the perfect photograph to wish her dad on Father's Day. The picture happens to be from Yami's wedding day as she can be seen dressed in her bridal outfit as she happily poses with her father in the frame. Yami Gautran's smile says it all in the picture. Accompanying her words and the million-dollar picture with a heart emoji, the Batti Gul Meter Chalu actress wrote: "Happy Father's Day papa... Love you." How cute is this picture! The comments section of the actress' post was filled up with comments from her Instafam.

Yami Gautam and Uri director Aditya Dhar, who worked together in the 2019 film, got married in an intimate ceremony earlier this month. The couple shared identical posts on Instagram and wrote: "With the blessings of our family, we have tied the knot in an intimate wedding ceremony today. Being very private people, we celebrated this joyous occasion with our immediate family."

Yami Gautam was last seen in Puneet Khanna's Ginny Weds Sunny. She shared screen space with Vikrant Massey in the film, which released on Netflix a few months ago. She has starred in movies like Bala, Yuddham, Badlapur, Sanam Re, Kaabil and Uri: The Surgical Strike. She made her Bollywood debut with Vicky Donor, co-starring Ayushmann Khurrana after featuring in TV shows and commercials.

When Ranveer Singh And Karan Johar Pose For A Selfie, Swag Is Guaranteed