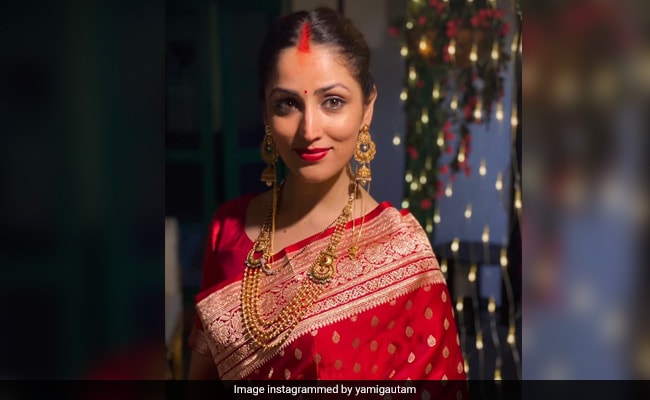 Amidst Yami Gautam's wedding photos on her Instagram, we spotted a glimpse of the new bride in her post-wedding avatar. Yami Gautam, who had an intimate wedding ceremony last Friday, has been filling up her Instagram with glimpses of the festivities. On Monday, as a refreshing change to her Instagram feed, she shared a photo of herself as a newly-married woman. Yami, who hails from Himachal Pradesh, described her mood with a local song that resonates with the ambience of her home state. "Rind posh maal gindane draaye lo lo," wrote Yami, which means heralding the spring season. "Let's welcome the spring season," Yami added to her caption. For those who need a reminder, the song also featured in the 2000 movie Mission Kashmir.

The actress got married to filmmaker Aditya Dhar last week. In the photo, Yami Gautam is every bit stunning in a red saree, which picks up the colour of her sindoor. Traditional jewellery and kohl-lined eyes complete Yami Gautam's spring-ready look. Yami Gautam's new-bride avatar was beast described by Tahira Kashyap and Vikrant Massey with the red heart icons.

Earlier, Yami Gautam filled up her Instagram with these snippets from her wedding festivities:

Yami Gautam dropped the wedding news in the form of a big surprise with this post on Friday.

Aditya Dhar is best known as the director of 2019 movie Uri: The Surgical Strike, which cast Yami Gautam as an undercover RAW agent. He is currently directing The Immortal Ashwatthama , starring Vicky Kaushal, who headlined Uri. Meanwhile, Yami Gautam is best known for films such as Vicky Donor, Kaabil and Batti Gul Meter Chalu. She will next be seen in Bhoot Police.