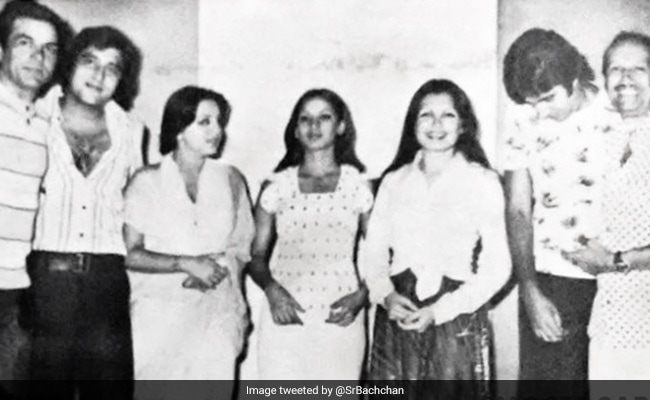 Amitabh Bachchan surprised the netizens with a throwback picture on Monday. The cine icon shared a monochrome photograph from the sets of the 1977 film Amar Akbar Anthony in which he played the role of Anthony Gonsalves. The photo features the director of the film Manmohan Desai. It also has the ensemble cast of Amar Akbar Anthony including Amitabh Bachchan, Neetu Singh, Vinod Khanna, Parveen Babi and Shabana Azmi. In the picture, Dharmendra can also be seen standing with them holding a clapperboard. He inaugurated the shooting of the film. Big B described the picture as "mahurat of Amar Akbar Anthony" and introduced the people in the picture to the netizens and wrote, "From right Man ji (Manmohan Desai) ; a bowed headed AB ; Parveen Babi; Shabana Azmi; Neetu Singh; Vinod Khanna; Dharam ji who gave the clap." Talking about the classic film, Amitabh Bachchan wrote, "AAA, ran 25 weeks in 25 theatres in one city alone - Mumbai...all India imagine!"

Amitabh Bachchan often treats his fans to throwback pictures. Earlier, he shared a photograph of the 19th Filmfare Awards with the team of the 1971 film Anand.

Big B also shared glimpses of the iconic movie on social media:

Here's picture of Amitabh Bachchan with his daughter Shweta Bachchan, who showed up on the sets of the 1976 film Adalat:

Shweta visits me on the sets of ADALAT in year 1976.. a meal and a frown .. hahahah .. and that hand offering help to her is WAHEEDA Ji

On Pran's 100th birth anniversary, Amitabh Bachchan paid "an ode" to the actor sharing two stills, one from the 1973 film Zanjeer and the another one from the 1978 film Don, in both of which he co-starred with Pran.

On the work front, Amitabh Bachchan will feature in Ayan Mukerji's Brahmastra. He will co-star Ranbir Kapoor and Alia Bhatt in the upcoming film. Big B also has some more films in the pipeline including Chehre, Jhund and Gulabo Sitabo.