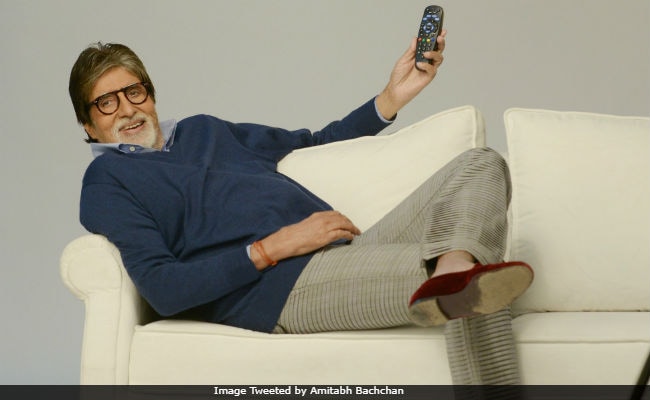 New Delhi: Amitabh Bachchan is one of the first Bollywood celebrities to have reviewed actor Irrfan Khan's soon-to-be-released film Blackmail. The 75-year-old actor watched the film last night and found it 'delightful.' The Piku star tweeted his review of the film and also shared a link to film's official trailer. "Saw a delightful film today... Blackmail... a brilliant screenplay, unique story, exemplary performances and great presentation and editing...Actors excel from Irrfan Khan to some fresh new faces .. so happy to see such creativity!!," Big B wrote on Twitter. Blackmail starring Irrfan Khan, Kriti Kulhari and Arunoday Singh releases on April 6.

Irrfan Khan, who was diagnosed with neuro-endocrine tumour, has put on hold a couple of projects in progress but wanted the best possible release for Blackmail. Speaking about which director Abhinav Deo told news agency IANS, "Irrfan doesn't want us to postpone the film. Bhushan (producer Bhushan Kumar) and I will make sure that Blackmail gets the best possible release. The onus of marketing and releasing the film is now onto us. We took the decision of launching the song only after meeting Irrfan."

Promoted
Listen to the latest songs, only on JioSaavn.com
Earlier in March, Irrfan Khan had revealed on Twitter that he'll be heading out of the country for the treatment. "The unexpected makes us grow, which is what the past few days have been about. Learning that I have been diagnosed with neuro-endocrine tumour as of now has admittedly been difficult, but the love and strength of those around me and that I found within me has brought me to a place of hope. The journey of this is taking me out of the country and I request everyone to continue sending their wishes. As for the rumours that were floated Neuro is not always about the brain and googling is the easiest way to do research. To those who waited for my words, I hope to be back with more stories to tell," Irrfan said in his statement.

Blackmail is a story about a middle-aged married man, who finds out about his wife's extramarital affair. The black comedy-drama film also stars actor Divya Dutta, Omi Vaidya, Anuja Sathe, Pradhuman Singh Mall and Gajraj Rao in prominent role. (With inputs from IANS)