Bhumi Pednekar Is "Pure Gold Baby" In This Sun-Kissed Pic 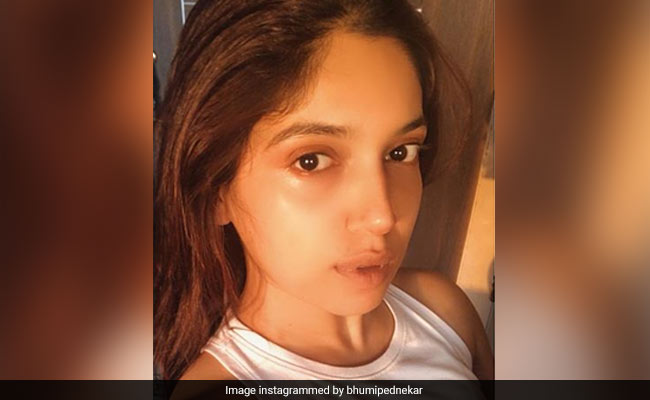 Bhumi Pednerkar updated her Instagram profile on Tuesday with a new selfie. The actress, who is taking her fitness sessions quite seriously during the lockdown, shared a sun-kissed selfie and we are in love with it. In the photo, Bhumi is in no make-up mode and sports a white sleeveless t-shirt. Not to mention, her flawless skin left her fans in awe. Sharing the selfie, Bhumi called herself a "pure gold baby" and wrote this in the caption: "I'm pure gold baby." She also added the hashtags #naturalfilter and #goldenhour to her post. Check out the actress' latest selfie here:

Earlier, Bhumi Pednerkar sent the Internet into a tizzy by sharing her stunning post-workout selfies. "Eat...Sleep...Workout x Repeat," she captioned one of them while for other, she wrote: "Stay motivated." Take a look at her posts here:

On the work front, Bhumi Pednekar made her debut in Bollywood with the 2015 romantic comedy Dum Laga Ke Haisha, in which she shared screen space with Ayushmann Khurrana. She has also worked in films like Toilet: Ek Prem Katha (alongside Akshay Kumar), Shubh Mangal Saavdhan (with Ayushmann Khurrana), Bala and Pati Patni Aur Woh. The actress was last seen in Bhoot - Part One: The Haunted Ship, in which she co-starred with Vicky Kaushal. She will co-star with Kareena Kapoor, Alia Bhatt, Ranveer Singh, Vicky Kaushal and Anil Kapoor in Karan Johar's Takht. Bhumi also has Durgavati in the pipeline.