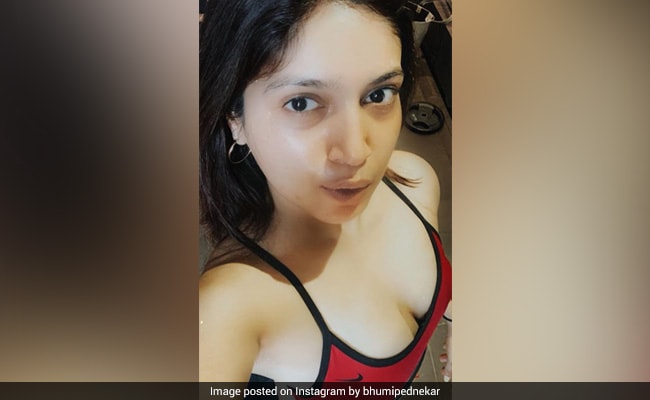 A day in the life of Bollywood actress Bhumi Pednekar goes somewhat like "eat, sleep, workout, repeat" (at least that's what her latest Instagram post suggests). On Thursday, Bhumi shared a selfie on her Instagram profile, which appears to be from her workout session at home. In the picture, Bhumi can be seen posing for the camera sans make-up, dressed in a red tank top and she looks simply stunning. The caption on the actress' post read: "Eat, sleep, workout, repeat." She accompanied the post with the hashtags #StayHome, #StaySafe, #healthybodyhealthymind, #immunitybooster and #homeworkout.

Without much ado, take a look at Bhumi's post here:

Earlier, Bhumi posted a picture from one of her workout sessions and she captioned it: "Stay motivated." In the photo, Bhumi could be seen in a no make-up mode, wearing a sports black athleisure. ICYMI, this is the post we are referring to:

Last year, the actress starred in several films, including Sonchiriya, Tushar Hiranandan's Saand Ki Aankh, Bala and Pati Patni Aur Woh, alongside Ananya Panday and Kartik Aaryan. She was last seen in the 2020 release Bhoot - Part One: The Haunted Ship, starring Vicky Kaushal in the lead role. The actress has Alankrita Shrivastava's Dolly Kitty Aur Woh Chamakte Sitare and Durgavati, in the pipeline.