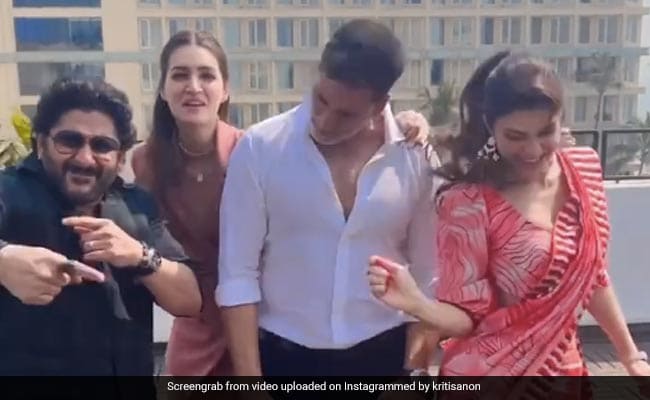 Akshay Kumar's Bachchhan Paandey is all set to hit the theatres on March 18. And, the star cast is super busy with the promotional campaigns. Apart from Akshay, the film features Kriti Sanon, Jacqueline Fernandez and Arshad Warsi in crucial roles. So what's the latest update? The star cast has dropped a video. This time, they are all thrilled to introduce the song Saare Bolo Bewafa to us. Kriti Sanon and Akshay Kumar jointly shared a video on Instagram where the star cast is seen dancing to the song. At first, we see Jaqueline in a red saree. Then the camera turns towards Arshad Warsi. Next is Kriti Sanon in a blazer dress. At last, we see Akshay Kumar in a white shirt. He is soon joined by the others as they keep grooving and lip-syncing to the song. The caption read, "Saare Bolo Bewafa. Are you tripping on this song too?"

Earlier, Akshay Kumar promoted the songSaare Bolo Bewafa along with Kapil Sharma on the comedian's talk show. Akshay's caption read, "Bewafa yani dhokebaaz. Sabki life mein hota hai. Abhi meri life mein hai Kapil Sharma. Aur aapki [Bewafa means unfaithful. We all have one such person in our lives. In my life, it is Kapil Sharma. Who is yours?] Make a reel with Saare Bolo Bewafa. Zor se bolo bewafa [Say it out loud, Bewafa]." In fact, the actor also called the comedian "Kapil Bewafa", which made Kapil Sharma sulk while the audience laughed.

The film revolves around the story of a goon named Bachchhan Paandey (played by Akshay Kumar) whose life is being turned into a documentary by Myra Deveka (played by Kriti Sanon). The film is set to release in cinemas on 18th March 2022.