"I only hope I could do the same for her," Anand Ahuja wrote for Sonam Kapoor earlier 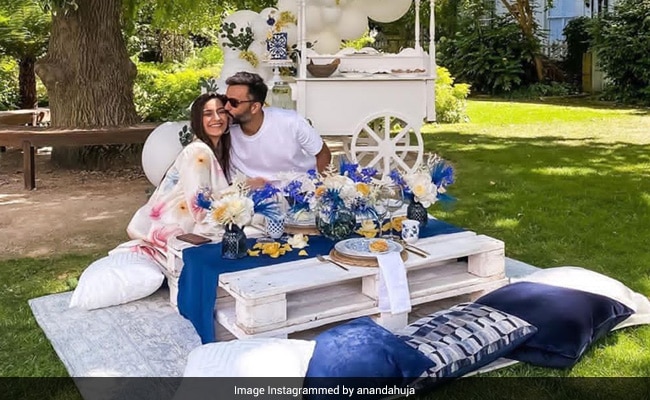 Anand Ahuja clearly can't stop thinking about his birthday picnic that was organised by his wife and Bollywood actress Sonam Kapoor, last week. TBH, we don't blame him, given how pretty the décor was. Not to mention the company of his beloved wife Sonam. Sharing a postcard-worthy picture from the Notting Hill picnic on his Instagram profile, on Thursday, Anand Ahuja wrote: "Throwback to this time last week." He added his and Sonam's staple hashtag #everydayphenomenal to his post. While we await Sonam Kapoor's response to the post, take a look at Anand Ahuja's post:

Earlier this week, Anand posted a picture from the aforementioned picnic on Instagram and he wrote: "I only wish that everyone would be blessed to have someone in their lives that makes them feel as special as Sonam Kapoor does me ... I only hope I could do the same for her. #everydayphenomenal."

I only wish that everyone would be blessed to have someone in their lives that makes them feel as special as @sonamkapoor does me ... and I only hope I could do the same for her. #everydayphenomenal

On his birthday, Anand Ahuja shared this picture and wrote: "Happening right now: My birthday gifts - Sonam Kapoor and this simple outdoor picnic she organised."

Sonam Kapoor married her longtime boyfriend Anand Ahuja in May 2018. Anand Ahuja runs the fashion label Bhane and the sneaker boutique VegNonVeg. The couple are currently staying in London.

Sonam Kapoor, who has been a part of films such Neerja, Padman, Prem Ratan Dhan Payo, Saawariya, Delhi-6, Raanjhanaa, Aisha and Sanju, was last seen in the 2019 film The Zoya Factor, in which she shared screen space with south star Dulquer Salmaan.