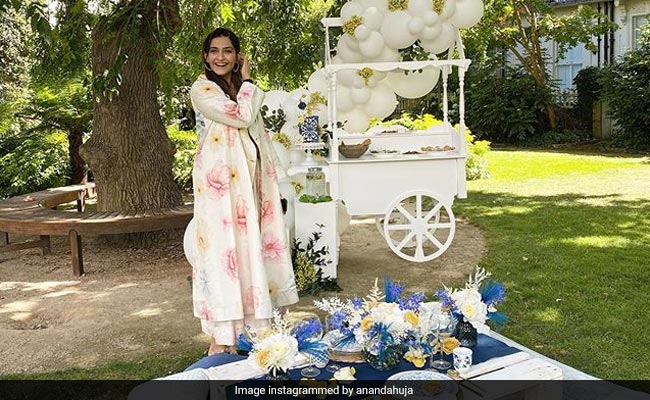 Sonam Kapoor made her husband Anand Ahuja's birthday special in more than just one way. The actress, who began Anand's birthday countdown a week ago, had been posting videos of some of his favourite things (more on that later). Sonam organised a picnic in London's Notting Hill, a picture of which Anand shared on his Instagram profile on Thursday evening. Pictures of Anand's birthday festivities are all things pretty, what with some beautiful décor, lush green garden and a happy Sonam Kapoor. Anand captioned the post, "Happening right now: My birthday gifts - Sonam Kapoor and this simple outdoor picnic she organised." He added the hashtag #everydayphenomenal.

Meanwhile, Sonam shared a post for the birthday boy. "Happy, happy 35th birthday my love.. You're my guiding light in everything," read an excerpt from her post.

Happy happy 35th birthday my love.. you're my guiding light in everything. Your childlike enthusiasm and age old wisdom is the most lethal combination of what a man should be. I love you the most in the whole world. Everyone says they are lost before they find the one. But I only found you once I knew who I was and found my self. And to answer your question , yes you can organise great birthday meals as well. Case in point my first birthday I celebrated with you. That was the best birthday I'd ever had till then and each year gets better. Love you monkey, you make #everydayphenomenal @anandahuja

Ready For Anand Birthday in London @sonamkapoor Sonam you are so Glow . . . . #sonamkapoor #sonam_kapoor_galaxy .

For Anand Ahuja's birthday, Sonam Kapoor made a special Instagram filter, comprising his "favourite things in the world" - ice cream and basketball.

Sonam had also been sharing videos, in which she guessed his favourite sneakers, musicians, cities, food items and what not. Check out some of the posts here:

It's Anand's birthday in a week, and I'm stoked! Starting today, for the next seven days-I'm going to be guessing some of his all-time favourite things. Beginning with a relatively easier one (, sneakers! I have mentioned a few more than just seven here, only to cover my bases! I hope I've gotten these right, otherwise, I'm in trouble haha. @anandahuja How'd I do? Also, here's a bonus question - If you had to choose between me and your sneakers, who'd you choose? (I suggest you think carefully before answering this one) #HappyBirthdayAnand #BirthdayWeek #EverydayPhenomenal #BirthdayCountdown #Sneakers Also thanks @henryvinoth and @aabhineet for the help!

T-2 days for Anand's birthday and I'm jumping up and down! Anand is nothing if not consistent, from the day I met him to now-his two favourites are exactly the same. Basketball and ice cream. I love you and I can't wait! Swipe left for your next present @anandahuja P.S - This filter is now available on my profile guys. Would love for you guys to use it, and don't forget to tag me! #EverydayPhenomenal #InstagramFilters #HappyBirthdayAnand #2daystogo #Birthday #BirthdayWeek #Basketball #IceCream

Anand Ahuja runs the fashion label Bhane and the sneaker boutique VegNonVeg. He and Sonam Kapoor got married in May 2018 after dating for several years. Sonam Kapoor's last release was the 2019 film The Zoya Factor, co-starring Dulquer Salmaan and Angad Bedi. Earlier in 2019, she featured in Ek Ladki Ko Dekha Toh Aisa Laga, alongside her father Anil Kapoor, actors Rajkummar Rao and Juhi Chawla.