Ahead of Anand Ahuja's birthday, Sonam Kapoor is really making the countdown special! 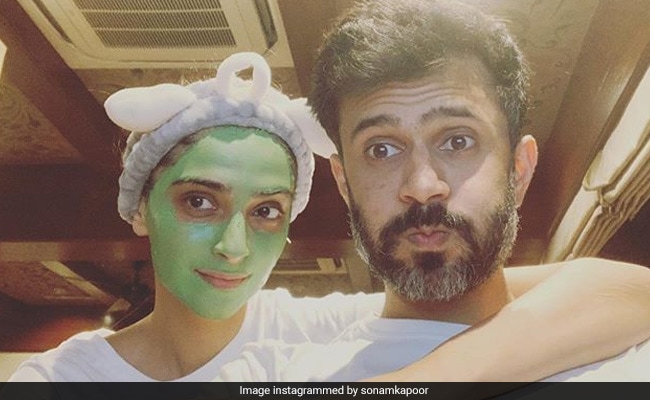 Sonam and Anand in a cute selfie (courtesy sonamkapoor)

Sonam Kapoor, currently in London with husband Anand Ahuja, is making the countdown to his birthday on July 30 super special. Sonam started a series of Instagram videos, in each of which she talks about Anand's favourite things - she mostly guesses and her picks are almost always right! In her recent Instagram video, she made a big reveal - she got personalised GIFs made on Instagram with Anand Ahuja's favourite hashtags - #BallIsLife, #GreatLikeWhoa and #EverydayPhenomenal. "There are so many things I love about Anand, and his adorable quirks and hashtags have to be one of them. Over the years, I have seen him use some really amusing hashtags but these have to be my top 3. I love you Anand and all the eccentric things you say and do. Hope you enjoy this small present," Sonam captioned her video, introducing the GIFs - they are so cute!

Anand Ahuja, who is a sneaker-head and also a basketball enthusiast, was bowled over by Sonam's pre-birthday gift. "I can't believe you GIF'ed "Ball is life". That's the MOST bad-a** girlfriend thing ever - in the history of girlfriends. Still can't believe this. Watched this video 5 times already! Don't want this countdown to end only," he wrote in the comments section. 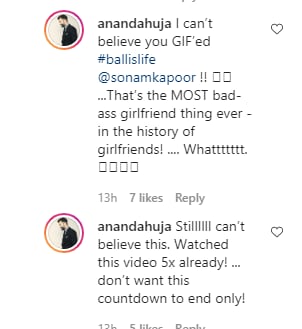 There are so many things I love about Anand, and his adorable quirks and hashtags have to be one of them. Over the years, I have seen him use some really amusing hashtags-but these have to be my top 3. I love you @anandahuja and all the eccentric things you say and do haha. Hope you enjoy this small present. P.S - These stickers will soon be available for you guys to use, so watch out for these! #EverydayPhenomenal #BallIsLife #GreatLikeWhoa #Gifs #InstagramGifs #HappyBirthdayAnand #3daystogo #Birthday #BirthdayWeek

Anand's favourite foods had to be a topic in itself haha. Cannot even begin to explain how much I miss going to restaurants and hogging with you @anandahuja ! But this will have to do for now. I'm pretty sure about my answers, so I hope I'm right. Love you! 💕 #EverydayPhenomenal #HappyBirthdayAnand #4daystogo #Birthday #BirthdayWeek #Foodie

Anand's 5 favourite cities! I'm fairly confident about this one; over the years we've had several chats about places that feel like home, and the ones that are memorable to us. I'd say our choices are pretty similar, for different reasons of course-so I hope I've got these right, @anandahuja ! I love you, and I'm so excited for your birthday. 💕 🎂 #EverydayPhenomenal #HappyBirthdayAnand #5daystogo #Birthday #BirthdayWeek#Delhi #Mumbai #Japan #NewYork #London

Up next, are some of Anand's most favourite musical artists. This one was a little tricky because he's into a lot of genres. So I'm just going to try my best here haha. Now, anyone who knows him knows that he's a hip-hop fanatic; but to me, it came as a pleasant surprise to know that he's into Indian classical as well (in a big way). I think his varied choices in music is what makes him so interesting! @anandahuja can't wait for the 30th! 💕 Let me know if you guys like the same artists as well! 😃 @2pac @thenotoriousbig @nas @aliciakeys @madstarbase #HappyBirthdayAnand #BirthdayWeek #EverydayPhenomenal #BirthdayCountdown #Music #IndianClassical #Hiphop

It's Anand's birthday in a week, and I'm stoked! Starting today, for the next seven days-I'm going to be guessing some of his all-time favourite things. Beginning with a relatively easier one (🤞), sneakers! I have mentioned a few more than just seven here, only to cover my bases! 😜 I hope I've gotten these right, otherwise, I'm in trouble haha. @anandahuja How'd I do? 😃 Also, here's a bonus question - If you had to choose between me and your sneakers, who'd you choose? (I suggest you think carefully before answering this one) 😂 #HappyBirthdayAnand #BirthdayWeek #EverydayPhenomenal #BirthdayCountdown #Sneakers Also thanks @henryvinoth and @aabhineet for the help!

Sonam Kapoor and Anand Ahuja celebrated their second wedding anniversary in May this year. After spending a few months at Anand's home in Delhi and some family time with the Kapoors in Mumbai, Sonam and Anand recently flew to London, where they have a home.