Amid Hectic Schedule, Vicky Kaushal Is "Sneaking Out" For Some Cricket 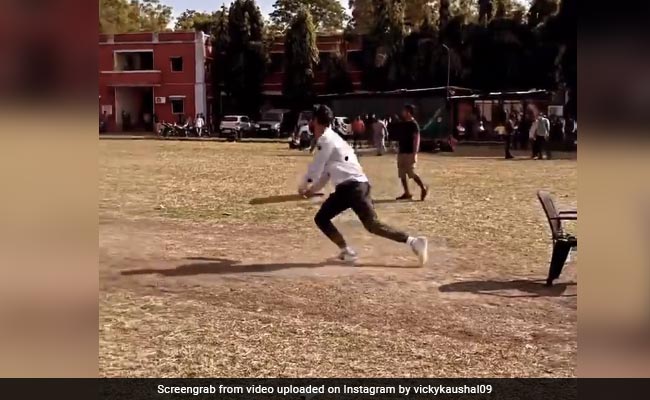 Vicky Kaushal, who is currently shooting for his next, was seen having some relaxed time on the sets of his upcoming film. Vicky Kaushal is shooting in Indore and he will be seen opposite Sara Ali Khan in the film. Amid the hectic schedule, Vicky Kaushal took out some time and was seen playing cricket with his team. He took a break and was seen batting on the field. Recently, Vicky Kaushal shared a video, in which, he is seen hitting a shot and taking runs between the wickets. Sharing the video, Vicky Kaushal wrote, "Nothing better than sneaking out time for some cricket on set."

Vicky Kaushal has been shooting at the Indore Christian College. Many fan pages of Vicky shared the video.

It was in December 2020, when Vicky Kaushal started shooting for the untitled film with Sara Ali Khan. A photo of Vicky Kaushal and Sara Ali Khan had gone viral from the sets of the film. In the viral photo, the actors were seen sitting on a scooter and shooting for a scene. The title of the film and more details are yet to be revealed. The film is being directed by Laxman Utekar.

Apart from a film with Sara, Vicky Kaushal will also be seen in Govinda Mera Naam opposite actresses Kiara Advani and Bhumi Pednekar. The film will be produced by Karan Johar's Dharma Productions and will be directed by Shashank Khaitan. Vicky Kaushal also has the much-awaited film Sam Bahadur, which is being directed by Meghna Gulzar.