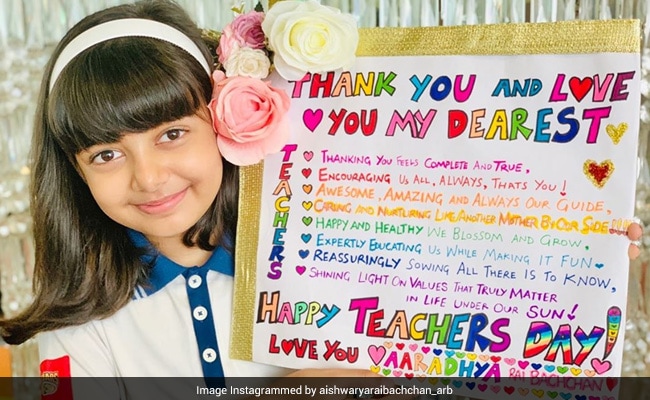 We often get to see Aishwarya Rai Bachchan and Abhishek Bachchan's daughter Aaradhya's creative streak, courtesy her mother's Instagram profile, who often shares pictures of the little one along with her work of art. The reason we brought this up today is because Aishwarya Rai Bachchan posted a picture of her 8-year-old daughter along with a special Teachers' Day greeting that she prepared. A happy Aaradhya can be seen posing with the card that she prepared for her teachers. Sharing the picture, Aishwarya Rai Bachchan added a few emojis to her post. Designer Falguni Peacock commented on the post: "So sweet. I remember making cards in school....So precious."

A post shared by AishwaryaRaiBachchan (@aishwaryaraibachchan_arb) on Sep 6, 2020 at 11:07am PDT

After being discharged from Mumbai's Nanavati Hospital, where she was being treated for COVID-19, Aishwarya Rai Bachchan shared a thank you note for her fans and well-wishers on her Instagram profile in July. "Thank you so much for all your prayers, concern, wishes and love for my darling angel, and for Pa, AB and me," read an excerpt from her post.

HANK YOU SO SO MUCH for ALL your Prayers , Concern, Wishes and Love for my darling Angel Aaradhya and for Pa, Ab ...and meRULY OVERWHELMED and forever indebted...GOD BLESS YOU ALL LL MY LOVE ALWAYS and Prayers for the well-being of you ALL and all yours... Truly, Deeply and Heartfelt... Be Well and Be Safe GOD BLESS VE YOU All too

A post shared by AishwaryaRaiBachchan (@aishwaryaraibachchan_arb) on Jul 28, 2020 at 12:23pm PDT

Earlier this year, Aaradhya made a special drawing as a tribute to healthcare professionals and essential service providers. Aaradhya also included Abhishek, Aishwarya and herself in the painting. See the post here:

A post shared by AishwaryaRaiBachchan (@aishwaryaraibachchan_arb) on May 3, 2020 at 11:39am PDT

In terms of work, Aishwarya Rai Bachchan  was last seen in the 2018 musical Fanney Khan, co-starring Anil Kapoor and Rajkummar Rao, which was a box office debacle. She also dubbed for the Hindi version of Disney's Maleficent: Mistress Of Evil, last year. She will next be seen in Gulab Jamun, co-starring her actor-husband Abhishek Bachchan. The film will be produced by Anurag Kashyap.

The actress has also signed a film with Mani Ratnam, which is based on Kalki Krishnamurthy's popular historical novel (The Son of Ponni). During an interview with news agency PTI, the actress confirmed the project and said, "Right now, I will be working with Mani Ratnam because I want to work him. It is a simple earnest reason to do the film and that's how I have worked over the years."