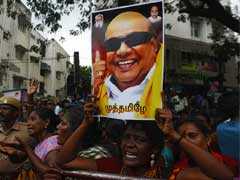 One of Tamil Nadu's tallest leaders, DMK patriarch and five-time chief minister M Karunanidhi died this evening at a hospital in Chennai after spending 11 days in intensive care.

There has been a flurry of reactions to Narendra Modi being nominated as the BJP's election committee chairman. Here are some of the reactions.

Who said what on the JD(U)-BJP break-up

The 17-year-old alliance between Nitish Kumar's Janata Dal (United) and the BJP is over. At a press conference, Bihar Chief Minister Nitish Kumar was not reticent about the cause of the split. He did not name the BJP's Narendra Modi, but said, "To be named Prime Minister, you need more than 272 votes," a clear jab at the Gujarat Chief Minister, a deeply polarizing politician.

Amid the massive mid-day meal tragedy unfolding in Bihar, a nasty political blame-game has begun over who was responsible for the deaths of 21 children. While the Opposition in Bihar has slammed the Nitish Kumar government for being "insensitive" and "callous", the ruling Janata Dal(United) or JD(U) has hit back, alleging political conspiracy.

When will the Centre wake up, says Narendra Modi after five Indian soldiers killed by Pakistan

Five Indian soldiers have been killed in an ambush by Pakistan soldiers in the Poonch area of Jammu and Kashmir. Sources say the Pakistani troops entered Indian territory and attacked the Indian post. The attack has led to ruckus in both houses of Parliament.

Defence Minister AK Antony, who has hurtled the government into a major controversy with his statement on the killing of five Indian soldiers in Kashmir, met the Prime Minister this afternoon. Uproar on the statement forced Parliament temporarily to adjourn.

Companies Bill passed by Parliament: Who said what

Parliament on Thursday passed a new bill which is the first major overhaul of company law in more than 50 years. The legislation strengthens accounting standards and shareholder rights.

This is undemocratic, says Narendra Modi after Arun Jaitley not allowed to visit Kishtwar

BJP leader Arun Jaitley, who had planned to lead a party team to Kishtwar in the Jammu region of Jammu and Kashmir, was stopped by authorities at the Jammu airport and was not allowed to proceed on Sunday morning. An indefinite curfew was imposed in Kishtwar ever since riots broke out on Friday.

Kishtwar violence: J&K government should be dismissed if there is no proper probe, says Mayawati

The communal violence in Kishtwar last week has now snowballed into a major controversy with the BJP attacking the Omar Abdullah-led Jammu and Kashmir government over delayed action. Mr Abdullah's party has invoked the riots in Gujarat in 2002 to fend off allegations regarding the conduct of one of its leaders, Sajjad Kichloo, who has resigned as the junior Home Minister following the deadly clashes.

The rupee traded at 61.68/69 versus its previous close of 61.43/44, but well below the record low of 62.03 reached earlier in the session as exporters stepped in to sell the greenback. The BJP has hit out at the government over the downfall of the rupee.

Independence Day: Quotes that made news

The clash of the Independence Day speeches turned into a political slugfest as the Congress and the BJP sparred over Narendra Modi's no holds barred attack on Prime Minister Manmohan Singh in his speech on India's 67th Independence Day.

Coal-Gate: Files do not disappear, they are made to disappear, says BJP

The ruling Congress came ready to push its flagship Food Security Bill in Parliament today, but the Bharatiya Janata Party made it clear - the house won't run until Prime Minister Manmohan Singh himself explained how crucial files connected to the coal allocation scam went missing.

In an incident chillingly reminiscent of the December gang-rape in Delhi, a 22-year-old photojournalist is in hospital with multiple injuries after being gang-raped by five people on Thursday evening at the Shakti Mills compound in Lower Parel, south Mumbai.

The UPA government's landmark Food Security Bill was finally taken up for discussion in the Lok Sabha. Here are the arguments made in Parliament:

Raghuram Rajan, a suave, unflappable University of Chicago economist, took over as the 23rd RBI governor today at a time when the Indian economy is facing a big crisis. The rupee has plunged nearly 20 per cent since May as Asia's third-largest economy confronts its worst crisis since 1990-1991. Mr. Rajan has few policy options to revive the rupee but one thing he can do immediately is explain to financial markets more clearly what steps the central bank is taking and the thinking behind them.