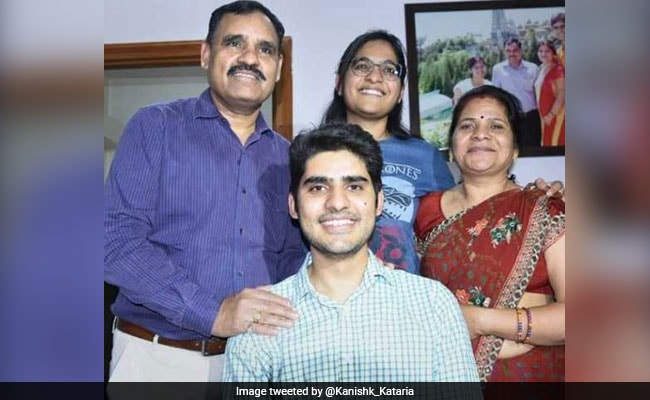 UPSC Civil Services topper for 2018 has been all over the news and on social media in the past couple of days. His success story is no less interesting. Kanishak Kataria, who quit a well-paying job in South Korea to pursue his dream of doing something for his country, was sure of his success in Civil Services exam but had not expected to become the UPSC topper.

In an exclusive interview with NDTV, Kanishak Kataria shared several titbits from his UPSC preparation to his personal life.

After completing his B.Tech. in Computer Science from IIT Bombay, Kanishak Kataria landed a job with a company in South Korea. He told NDTV that he had always wanted to live outside India and explore the world beyond. While working in South Korea he felt that he was earning well but was not able to connect and help people in his own country. So after working in South Korea for one year, Mr. Kataria quit his job and returned to India.

He revealed that in South Korea he was earning close to One Crore and upon returning to India his salary was drastically reduced by almost one-third.

Talking about his preparation strategy, he said that he had started reading newspapers 2 years prior to appearing for the exam to stay updated about current affairs. He also read online news and magazines for current affairs topics.

He also took coaching classes in the initial phase. For Prelims preparation, he said, he looked through question papers of last few years and also appeared for test series.

He devoted about 13-14 hours each day before the Civil Services Main examination. Commenting about social media, he said that two months prior to the exam he completely cut himself off of social media.

He had deleted his Facebook and Twitter account and was only on Instagram which he rarely used. On whatsapp, he was part of two groups where like-minded people discussed about studies and preparation strategies.

He also revealed that he never felt the pressure of the result and was always motivated that he has to prepare and sit for the exam.

As for his inspiration, he said that both his father and uncle are Civil servants and had always been a source of inspiration to him. His father is an IAS in Rajasthan.

About his success mantra, he said that he believes in hard work and staying positive and that's what worked for him.

Upon asking about giving credit to his girlfriend apart from his parents, Mr. Kataria said that his parents always taught him to give credit to whoever has been instrumental in your success and hence the credit to his girlfriend. He said that had it been someone else who had helped in his journey to becoming the UPSC topper, he would have credited them too. About the reaction on social media to him crediting his girlfriend, he said he has not had time to look at it and that it was only natural for him to credit her.

About his future plans, he said that he only hopes to fulfil people's expectations with him and that he is able to work for the betterment of the country.