UPPRPB released the UP Police result yesterday, however, since then, the official website --uppbpb.gov.in -- is not opening properly.

UPPRPB, the recruitment arm of Uttar Pradesh Police, released the results of Civil and PAC constable written exam yesterday, however, since then, the official UP Police result website -- uppbpb.gov.in -- is not opening properly. This causes confusion among the candidates as the Board has scheduled the next stage of the recruitment process, Document Verification (DA) and Physical Standard Test (PST), from December 6, 2018, i.e. today. Without accessing the results, the candidates would not know which centre or the timing they have been assigned for the process. The Uttar Pradesh Police Promotion and Recruitment Board (UPPRPB) had scheduled the announcement of  the UP Police result 2018 for this recruitment on December 4, 2018, but released it one day after.

After several glitches later, the UP Police result link opened today. But, to the dismay of the applicants who had appeared for the recruitment exam in June and October this year, the link opens to this: "Too many users are connected. Please try again after few minutes". 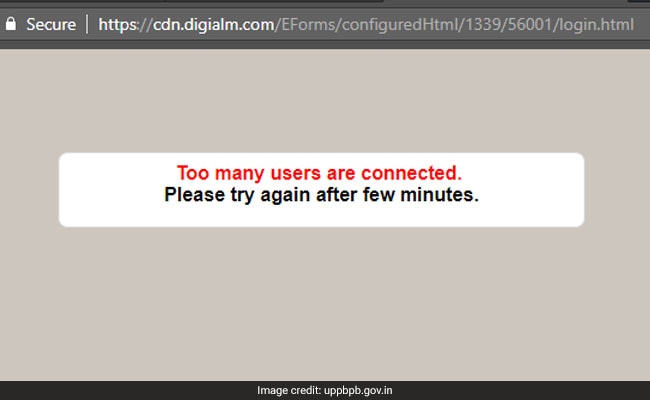 Several applicants who were eagerly waiting for the results took the issue to social media platforms like Twitter:

@UPCMyogi sir there is big scamp in Up police constable results & website not showing anyone results & Only few students selected for PST on. A not basis because results are not declared

@myogiadityanath sir kindly give a attention for up police Bharti 2018, they don't show our result, only selected candidates can open their result, after normalisation who get 200+ they are not selected and who got 180+ marks they are selected, we want to see our result...

@Uppolice@CMOfficeUP@UPGovt@drdineshbjp
Dear All
Yesterday was the result of up police services but to my surprise the server on which the results has been published is out of service from last 24 hours may I know what steps have been taken by the I.T department to improve it

UPPRPB has announced recruitment of around 42,000 Civil and PAC constable vacancies in state police.

Once the UP Police results websites are opened properly, the candidates may check their results following these steps:

Step Two: Click on the result link given on the homepage

Step Four: On next page, enter your registration number and date of birth.

Step Five: Click submit and check your UP Police result on next page.