The Rajasthan Human Rights Commission has sought a report on the matter from the hospital administration by June 25. 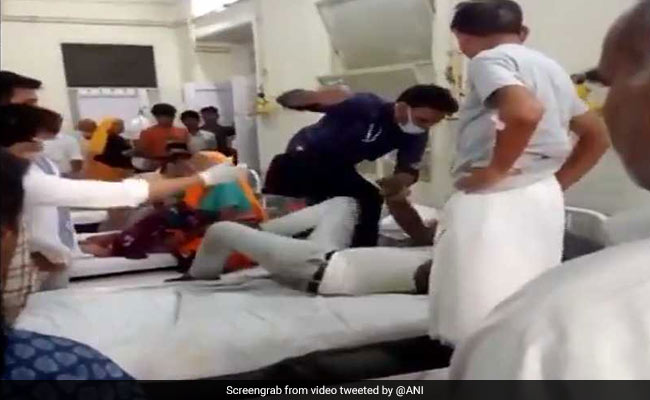 A video allegedly showing a doctor thrashing a patient admitted at Jaipur's SMS Hospital was shared on social media websites, following which the Rajasthan Human Rights Commission sought a report on the matter from the hospital administration by June 25.

According to the hospital administration, patient Mubarik, 30, from Uttar Pradesh and currently residing in Chandpole area in Jaipur, was admitted at their facility on June 1 for a type of poisoning with gastritis. However, he turned violent with the doctors, they said.

The patient first manhandled a female doctor and when a male doctor and the patient's family tried to calm him down, he started to physically attack those present there, hospital authorities said.

#WATCH: A resident doctor beat up a patient in Sawai Man Singh (SMS) Medical College in Jaipur, Rajasthan, yesterday. Raghu Sharma, Medical & Health Minister of Rajasthan says,' We have asked for a report on the video as to what really happened.' pic.twitter.com/9mU97nwif2

"The video circulated on social media seems to be edited. A disciplinary committee will investigate the matter and a report will be submitted to the Rajasthan Human Rights Commission as well. The patient is now fit to be discharged," SMS Hospital Superintendent Dr DS Meena said.

The incident occurred on June 1 but the matter came to light today after the video started to trend online.

In the video, a doctor is seen slapping the patient in the ward where other patients were also undergoing treatment.

Taking cognisance of the video, Rajasthan Human Rights Commission sought report on the action taken by the hospital administration, saying that thrashing any patient is a crime.