While traffic was suspended on the Srinagar-Leh highway due to snowfall in Sonamarg, the Jammu-Srinagar highway had to be closed after heavy rains

Major highways were closed and villages in high-altitude areas cut off due to heavy overnight snowfall and rains in Jammu and Kashmir, with authorities closing schools for today in some districts as a precautionary measure.

The weather will be overcast with the possibility of more rains or snow for most part of the day, according to the meteorological office.

While traffic movement was suspended on the Srinagar-Leh highway due to snowfall in Sonamarg and adjoining areas, the Jammu-Srinagar highway was closed after heavy rains triggered shooting stones and mudslides between Chanderkot and Banihal in Ramban district, officials said.

The Mughal Road, an alternative link between Poonch and Rajouri in the Jammu region and south Kashmir's Shopian district, was closed following accumulation of snow at Pir Ki Gali and adjoining areas, they said, adding that the Bandipora-Gurez road was also shut due to prevailing weather conditions.

Snowfall has been reported at many places, including Handwara, Kralpora, Pazipora and Tangdhar areas of Kupwara district in north Kashmir, Tangmarg in Baramulla district, and the Khansahib area of central Kashmir's Budgam, for the first time this season,officials said. 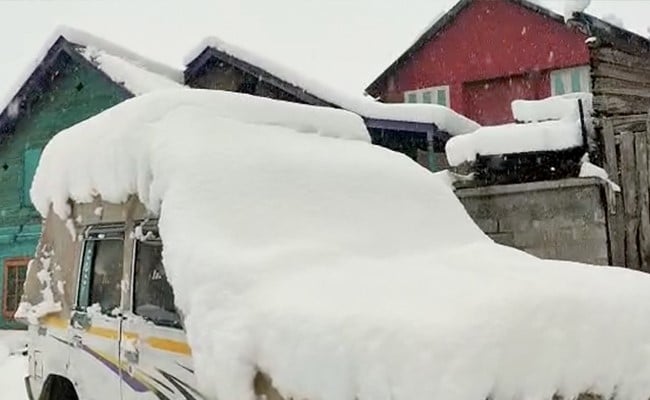 Most high-altitude areas of Jammu and Kashmir received heavy snowfall. Around six inches of snow was recorded in the ski resort of Gulmarg in north Kahsmir's Baramulla, while Gurez and Machil have received more than12 inches of snow, they said.

The heavy snowfall has resulted in many far-flung areas in the higher reaches being cut off from district headquarters, officials said. From tomorrow and until Friday, the weather will be partly cloudy, after which there is a possibility of light-to-moderate showers or snow on Saturday. However, there is no forecast of any major snow spell till November 20, a meteorological office said.

Reports of snowfall were also received from the high-altitude areas of Ramban, Udhampur, Kishtwar, Doda and Kathua districts and hill resorts of Patnitop, Sinthan and Banihal, while the plains, including Jammu, were lashed by rains early today.

"Weather is overcast in most parts of Jammu and Kashmir with snowfall over the higher reaches and rains in plains. Same weather is likely to prevail most of the day" an official of the meteorological department said.

Srinagar and other areas in the plains of the Kashmir Valley were also lashed by rains. Officials said all schools up to middle standard were closed for the day in Kishtwar and Doda district as a precautionary measure due to the prevailing weather conditions.

On the 270km Jammu-Srinagar highway, the only all-weather road linking Kashmir with the rest of the country, a transport department official said no traffic was allowed either from Jammu or Srinagar due to inclement weather in the morning.

The official said shooting stones from the hillocks overlooking the highway at Panthiyal, Nashri and Cafeteria Morh are hampering road clearance operations for early restoration of traffic movement on the strategic road.