Upendra Kushwaha To Decide Whether His Party Will Leave NDA Today

A Rashtriya Lok Samata Party leader said the RLSP's tough stance made it clear that its association with the NDA, which means the BJP and Ram Vilas Paswan's Lok Janshakti Party, is "over for all practical purposes". 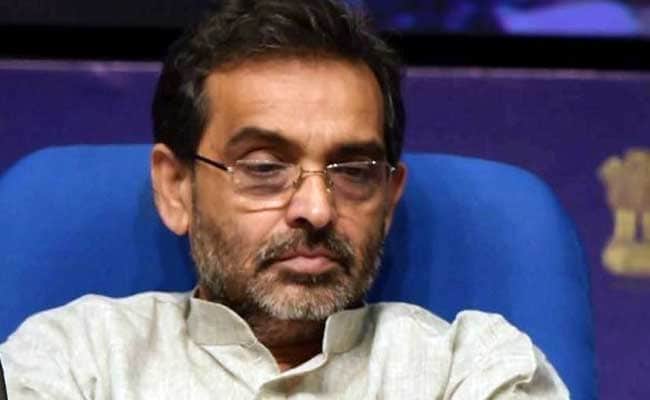 A party leader, on condition of anonymity, said that Mr Kushwaha may also resign as Union minister.

Union Minister Upendra Kushwaha-led Rashtriya Lok Samata Party (RLSP) is likely to break ties with the NDA government, the formal announcement of which is likely to be made today, a senior party leader said.

The leader, on condition of anonymity, said that Mr Kushwaha is also likely to put in his papers as Union minister.

Mr Kushwaha is the Minister of State for Human Resource Development in the National Democratic Alliance (NDA) at the Centre.

"That (Mr Kushwaha's resignation) is just a formality which would be completed once he visits Delhi and meets PM Modi," the leader said.

Yesterday, the RLSP made a scathing attack on the Narendra Modi government and the Nitish Kumar government in Bihar.

Mr Kushwaha, who is authorised to take necessary political decisions at a two-day Chintan Shivir (brainstorming session) of the RLSP being held in Valmiki Nagar in Bihar and attended by members of national and state executives, is scheduled to address a rally at Motihari today.

The party leader said the RLSP's tough stance made it clear that "our association with the NDA, which means the BJP and Ram Vilas Paswan's Lok Janshakti Party, is over for all practical purposes. We had no alliance with Nitish Kumar's Janata Dal (United) in any case. He returned to the coalition only last year, while we had been a part of the NDA since 2014".

In a strongly-worded, four-page resolution, the RLSP expressed concern over many alleged objectionable and unnecessary decisions taken by the BJP and the central government in the recent past.

It said "we are not opposed to construction of mosques and temples. But this is not the function of political parties and their meddling in such matters causes tensions in the society and diverts the attention of the public from real issues".

On the growing chorus demanding the construction of a Ram Mandir in Ayodhya ahead of the Lok Sabha elections, RLSP's resolution said it "gives rise to the suspicion that the largest party in the coalition ruling the Centre, and some of its leaders, are deliberately trying to make the people forget about poverty, illiteracy and unemployment and get swayed by emotive issues. The party strongly condemns this attitude".

In the strongest criticism so far of the Nitish Kumar government in Bihar, RLSP said the chief minister's silence over scams during his rule give rise to the suspicion of his involvement in them and charged him with having capitulated before communal forces.

"Collapse of law and order has forced the people of the state to live in fear. The state government revels in its own gimmicks coming up with fanciful ideas like a five-year agriculture road map while turning a blind eye towards the problems faced by the peasantry.

"The party (RLSP) takes the pledge to dislodge this government from power in the state, deeming it necessary to usher in peace and prosperity", the resolution added.

Mr Kushwaha's party's future course of action was not clear even though the grand alliance constituents Rashtriya Janata Dal, Congress and Hindustani Awam Morcha have been trying to reach the RLSP for long.

Mr Kushwaha  has also been in talks with former JD(U) leader Sharad Yadav who has formed his own party. There is speculation that two small parties are mulling idea of a merger.

However, a spectre of a split also looms large on the RLSP with both its MLAs and a lone MLC, besides one of its MPs, are said to be in touch with Nitish Kumar and keen on remaining in the NDA in the event of Mr Kushwaha breaking ties with it.