Upendra Kushwaha claimed he was not given an appointment by BJP chief Amit Shah and Prime Minister Narendra Modi. 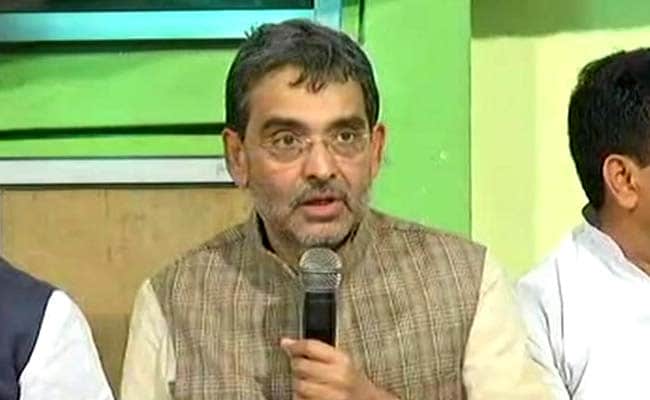 Upendra Kushwaha game an ultimatum to the BJP on November 17. (File)

After his "ultimatum" to the BJP for finalising seat-sharing among NDA constituents in Bihar by November 30 went unheeded, Union minister and RLSP chief Upendra Kushwaha on Saturday fired a fresh salvo at the BJP leadership, saying a person who heads towards doom loses his reasoning.

Mr Kushwaha claimed he was not given an appointment by BJP chief Amit Shah and Prime Minister Narendra Modi. The president of Rashtriya Lok Samata Party (RLSP) when on to recite a stanza in Hindi composed by poet Ramdhari Singh Dinkar,  "Jab nash manush par chhatha hain, pahle vivek maar jatha hain" (as a person heads towards doom he loses his reasoning).

He was talking to reporters in Motihari, headquarter of East Champaran district, where he is expected to make a big announcement at a public meeting on December 6.  The party is holding a two-day brainstorming session at Valmikinagar on December 4-5 in West Champaran.

"I do not know why neither Shah (Amit) nor Modi (Narendra) gave me an appointment.They may have had other preoccupations. But there are other modes of communication. There could have been at least a phone call. The situation reminds me of Dinkar's line," he said before reciting the stanza from the epic Rashmirathi.

After serving an ultimatum to the BJP on November 17 to formalise seats among NDA partners in Bihar for the next year general election by November 30, Mr Kushwaha, whose efforts to meet BJP president Amit Shah did not materialise, had said that he would meet only the Prime Minister on the issue.

Ever since the announcement by the BJP president that his party and Chief Minister Nitish Kumar's JD(U) will contest equal number of seats out of the total 40 Lok Sabha constituencies in Bihar, Mr Kushwaha has been publicly showing his unhappiness.

He had said that the BJP had offered RLSP two seats which his party rejected and sought a "respectable" number instead.

Mr Kushwaha's party had won all the three seats it had contested in 2014 in Bihar with the BJP. But, with the return of Nitish Kumar's JD(U) in the coalition, the equation changed.

Mr Kushwaha came into political prominence after Nitish Kumar backed him as the leader of opposition in Bihar assembly in 2004 despite the fact that it was his first outing as an MLA, but later fell out with the JD(U) chief and floated RLSP.

Mr Kushwaha aligned with the BJP in the last Parliamentary election, while the JD(U) was part of the grand alliance with Lalu Prasad's Rashtriya Janata Dal and the Congress.

His remarks have further fuelled speculation that he may quit the NDA in favour of 'mahagathbandhan' comprising RJD, Congress and HAM of former chief minister Jitan Ram Manjhi.

The Congress, which is the second largest constituent of the opposition Grand Alliance, urged Mr Kushwaha to make haste and come out of the NDA.

"It is now amply clear that the BJP is going to give short shrift to Kushwaha. On the other hand, the Mahagathbandhan has been waiting with open arms. The RLSP chief must not drag his feet now," Congress MLC Prem Chandra Mishra said.

He also claimed there will be a "stampede-like" situation within the NDA once the results of assembly polls in five states are out on December 11 and it "becomes clear that the BJP is a sinking ship".

BJP MLA and Bihari unit vice-president Mithilesh Tiwari, however, asserted that Mr Kushwaha is not going to quit the NDA.

"Setting up frequent deadlines and extending the same say a lot about his inclination. I cannot comment on his grievances.... But we do have just one complaint against Kushwaha. He keeps airing his grievances before the media, though he has no need to do so. He is a member of the Union Council of Ministers. He is bound to have meetings with the Prime Minister where he can express his concerns," Mr Tiwari added.

Meanwhile, divergent opinions emerged from within the five-year-old party of Mr Kushwaha

"I met Sharad Yadav, the Loktantrik Janata Dal with whom our party has ideological affinity. Our exit from NDA is only a matter of time," RLSP working president Nagmani said in Delhi.

However, party vice-president Bhagwan Singh Kushwaha said Upendra Kushwaha got a ministerial berth despite having just three MPs. "He should not go on alleging disrespect within the NDA. Would it be proper for a leader of his seniority to accept the supremacy of Tejashwi Yadav (RJD leader)," he said.