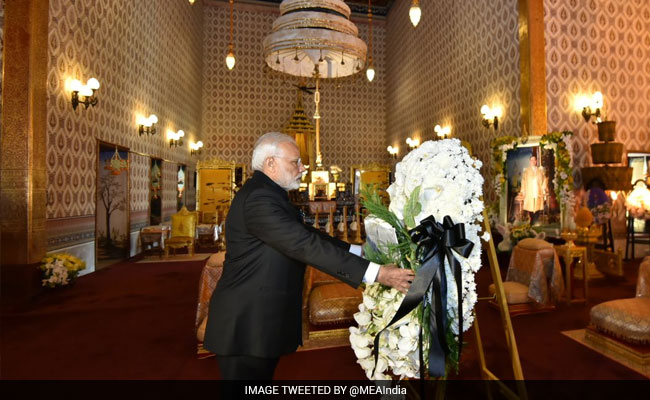 A one-year mourning period had been announced in Thailand following the monarch's death.

Bangkok: En route to Japan, Prime Minister Narendra Modi today made a surprise stopover in the Thai capital to pay his respects to revered King Bhumibol Adulyadej, who died last month after a protracted illness.

Prime Minister Modi will lay a wreath and pay final respects to the late King Bhumibol, whose body is lying in state at the Grand Palace complex here.

Modi was received at the airport by Thai Transport Minister Arkhom Termpittayapaisith. Bhumibol, the world's longest ruling monarch, died aged 88 on October 13. He was adored by many of his subjects and seen as an anchor of stability in a kingdom rocked by turbulent politics.

A one-year mourning period had been announced in Thailand following the monarch's death.

Thousands of Thais are still streaming into the gates of Bangkok's Grand Palace to pay their respects to the late King.

Promoted
Listen to the latest songs, only on JioSaavn.com
After laying the wreath, Modi will head to Japan for a three-day visit during which the two countries are expected to sign a civil nuclear deal besides discussing ways to step up cooperation in areas like trade, investment and security.