The AAP shift the blame to BJP-ruled civic bodies by claiming that the municipal corporations are responsible for cleaning 98 per cent of drains. 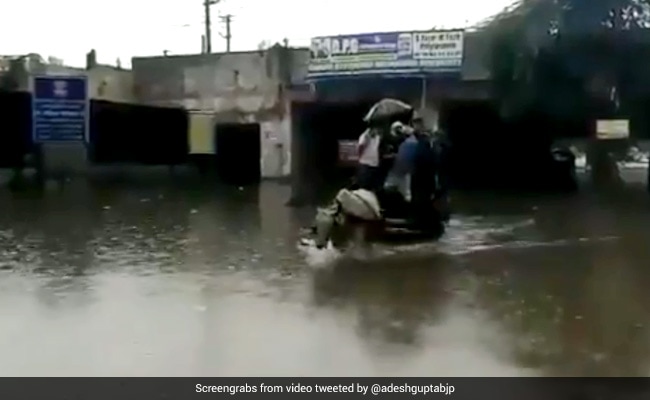 The BJP and Congress' Delhi unit hit out at the AAP government over waterlogging in various places of the city following the heaviest spell of rains this monsoon on Thursday, holding it responsible for the situation.

The AAP, however, attempted to shift the blame to BJP-ruled civic bodies by claiming that the municipal corporations are responsible for cleaning 98 per cent of drains and they have not done their job despite funds being sanctioned for it.

Along with the video clip, he tweeted, "Due to waterlogging Tughalaqabad people are resorting to riding a bullock cart. Delhi is jammed and the AAP government is responsible for it. Delhi is suffering due to failed policies of the Arvind Kejriwal government."

Delhi Congress president Anil Kumar too tweeted the same video and rhetorically asked the chief minister who will be held responsible for it.

"Delhi, our Delhi. Just thinking who will Kejriwalji hold responsible for it. Will Nehru again have to go to witness box? One thing is sure, Kejriwal ji will not work," Mr Kumar tweeted in Hindi.

MP and former Delhi BJP president Manoj Tiwari also alleged that the Delhi government has "failed" to tackle the waterlogging problem in the national capital.

Tweeting a list purportedly detailing the jurisdiction of different agencies on desilting of drains, Tiwari said, "The data shows that out of 3,737 km drainage network in the city, 2,588 km is with Delhi government."

"Also roads more than 60 feet are with AAP government where most waterlogging cases were reported even today," he wrote on the microblogging site.

However, AAP Political Affairs Committee member Durgesh Pathak said, "It has become a habit of the BJP and Congress to blame the Kejriwal government for everything."

"BJP-ruled MCD has the responsibility of cleaning 98 per cent of the drains. Then why have they not done it despite sanctioning of all required funds by us? My only advice to them is that if they are not able to handle MCD, they should give it to us. We will do it in the same budget in a much better way," he said.