A group of rebel lawmakers are holed up in Mumbai's Renaissance Hotel with Congress leader DK Shivakumar camped outside. He was stopped from entering by the police after the rebels asked for protection from Mr Shivakumar, who, they alleged, would "storm" their hotel

A group of ten rebel Karnataka lawmakers, whose letters of resignations have thrown the fragile Congress-Janata Dal Secular alliance in the state into disarray, approached the Supreme Court today, alleging that Ramesh Kumar, Speaker of the Assembly, had "abandoned his constitutional duty" and was deliberately delaying accepting their resignations.

"Notwithstanding the same and fearing that the Chief Minister (HD Kumaraswamy) may have to tender resignation for want of confidence of the House, the Speaker is acting in a partisan manner to frustrate the will of the House," the rebel lawmakers wrote in their petition, claiming that Ramesh Kumar "left in a private car and became untraceable" after becoming aware of the resignations.

Senior advocate Mukul Rohatgi appeared in court on behalf of the legislators, seeking an urgent listing. A bench headed by Chief Justice Ranjan Gogoi took note of the submission and said it would consider if the petition could be listed tomorrow.

The rebel lawmakers have asked the top court to direct the Speaker to accept their resignations and to restrain him from proceeding with their disqualification when the Assembly re-opens on Friday.

The Congress had sought the disqualification of its rebel legislators, accusing the BJP of bribing them to switch sides. The BJP has denied the charge, with senior leader Rajnath SIngh blaming Congress's Rahul Gandhi for the crisis.

The want-away legislators cited the IMA Ponzi scam and the JSW land deal to highlight corruption in the ruling government and also hit out at Chief Minister HD Kumaraswamy, alleging collusion between the government and the Speaker.

"As a result of the concerted acts between the Speaker and the government, a minority government which does not enjoy the confidence of the House continues in power illegally," the petition read. 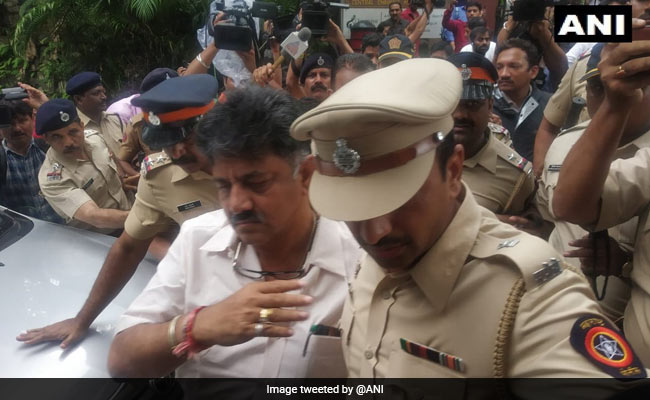 "Any elected Member of the Legislature is entitled, in consultation with his conscience or other attendant circumstances, to resign his membership of the Legislature. It is stated that the MLAs disenchanted with the mal-administration under the present dispensation wish to resign," it said.

Referring to the current political situation as extraordinary, the petitioners sought "the court to invoke its extraordinary jurisdiction for upholding the democratic principles as enshrined in the Constitution".

Eight Congress and three JDS legislators sent letters of resignation to Speaker Ramesh Kumar last week. Two more Congress leaders resigned on Monday. Mr Kumar did not consider any of the resignations until he returned to office yesterday, at which point he said eight were "not in order" and offered the beleaguered state government some breathing room.

"I have certain rules. I will go by that. Then the decision will be taken. I have to be responsible. Certain things in law are implied. Office of the Speaker should behave responsibly. No time frame is mentioned there," Mr Kumar said yesterday.

The Congress-JDS pairing has 118 members in a 224-seat Assembly. The resignations of the rebel leaders, if accepted, will bring the majority mark down to 106 and, crucially, the government down to 105. The BJP, which failed to form the government after last year's election, has 107 members after two independent legislators offered their support.

A group of the rebel lawmakers are holed up in Mumbai's Renaissance Hotel. The Congress's Mr Fixit, DK Shivakumar, has been camped outside the hotel gates since early this morning. He was stopped from entering by Mumbai Police after the rebels asked for protection from Mr Shivakumar, who, they alleged, would "storm" their hotel.

With inputs from IANS and PTI