As the BJP vehemently denies any role in the crisis in Karnataka, where the Congress-Janata Dal Secular coalition is fighting for survival after multiple resignations, Union Minister Rajnath Singh in parliament took a swipe at Rahul Gandhi sitting across the house.

"It is Rahul Gandhi who started the resignation spree in Congress, now one leader after another is quitting. What does the BJP have to do with this?" Rajnath Singh remarked in the Lok Sabha, and the camera panned to Rahul Gandhi and his mother Sonia Gandhi in discussion.

"Our party does not have a tradition of putting pressure or offering inducements to any other party's lawmaker or legislator. Because we are committed to the sanctity of parliamentary democracy," the Defence Minister said.

With 14 resignations pushing the Karnataka coalition to the brink, the timing couldn't have been worse. The Congress accuses the BJP of trying to destabilise the coalition ever since it came to power in May last. 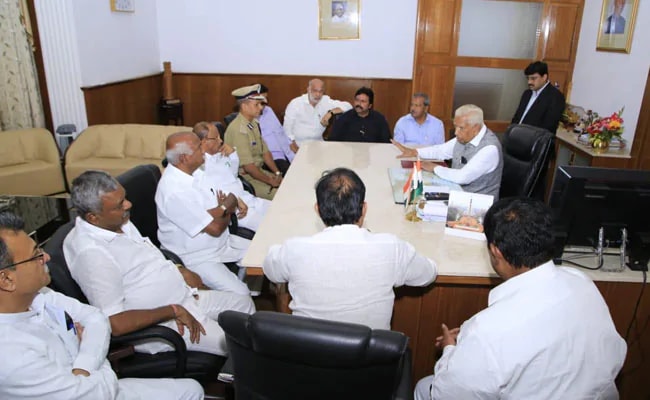 In parliament, Congress leader Adhir Ranjan Chowdhury said: "They say they believe in democracy. There is an attempt to break the Congress. A dal badlu (switching party) conspiracy. Our MLAs are poached to Mumbai, there is a planned, well-calculated design."

The ruling coalition in Karnataka plunged into crisis after 13 lawmakers from both partners resigned last week.

The resignation today of a minister, an independent lawmaker, who has pledged his support to the BJP, could be the proverbial straw.

With 14 exits, the ruling coalition drops to 104, which is two short of the effective majority mark after the resignations. The BJP, after winning the support of one more lawmaker, will have 106.

The Congress and JDS have accused the BJP of flying the rebel lawmakers to Mumbai and sequestering them at a five-star hotel in preparation for staking claim to power.

BJP Karnataka chief BS Yeddyurappa had said, "Let's wait and watch. Are we sanyasis (hermits)? After the resignation process is over and the speaker takes his decision, leaders of our party will discuss and decide."

Mr Yeddyurappa was chief minister for 48 hours before he was forced to step down after failing to gather enough numbers to form government in May last year.

The Congress and JDS of Chief Minister HD Kumaraswamy then came together to try and keep the BJP out of the government. Both parties have been trying to persuade the rebels who resigned on Saturday - eight from the Congress and three from the JDS.

The independent lawmaker who may have tipped the balance, Nagesh, has left for Mumbai, which has become the base of the rebels.

The BJP has said it should be invited to form a new government but it has denied the coalition's accusations of engineering the crisis. "This was an opportunistic alliance to prevent the BJP from coming to power. It has faced problems from Day 1. Don't blame the BJP for your own faults," said the party's Nalin Verma.