Gujarat By-Election Result 2019: Over 600 government employees have been deployed for the exercise that began at 8 am in the constituencies spread across six districts. 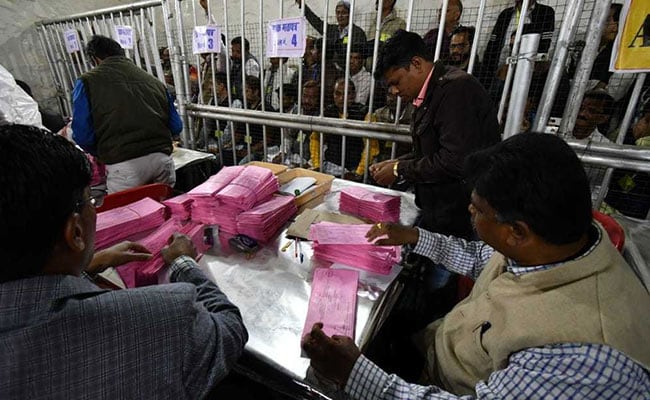 Counting of votes for byelections to six Assembly constituencies in Gujarat began on Thursday morning. Over 600 government employees have been deployed for the exercise that began at 8 am in the constituencies spread across six districts, Gujarat Chief Electoral Officer S Murali Krishna said.

An average 53.67 per cent voter turnout was recorded in the byelections held on Monday in Tharad seat of Banaskantha district, Radhanpur in Patan, Kheralu in Mehsana, Bayad in Arvalli, Amraiwadi in Ahmedabad and Lunawada in Mahisagar district.

"Each counting centre will have a three-layer security, comprising personnel of the local police, State Reserve Police and Central Armed Police," it said.

Byelections were necessitated in Radhanpur and Bayad after their respective sitting Congress MLAs Alpesh Thakor and Dhavalsinh Zala joined the ruling BJP.

The saffron party fielded Thakor and Zala in the bypolls from their respective seats.

Besides, bypolls were held in Tharad, Lunawada, Kheralu and Amraiwadi after the sitting BJP MLAs got elected to the Lok Sabha.

Four of these six seats were won by the BJP in the 2017 Assembly polls, and the rest two by the Congress. Apart from Thakor and Zala, the BJP fielded Jivrajbhai Patel in Tharad, Jignesh Sevak in Lunawada, Ajmalbhai Thakor in Kheralu and Jagdish Patel in Amraiwadi.