Jharkhand Assembly Election Result 2019: On Monday, the JMM-led alliance had a decisive victory in Jharkhand as it won 47 seats, well ahead of the majority mark of 41 in the 81-seat assembly. 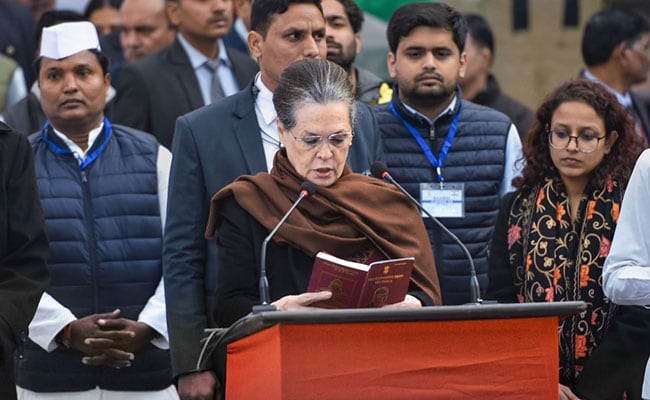 Sonia Gandhi thanked the people of Jharkhand in a statement on Monday.

The Jharkhand Mukti Morcha (JMM)-Congress-RJD combine's win in Jharkhand is of "extreme contemporary importance", Congress chief Sonia Gandhi said on Monday, adding that the people in the state "have defeated BJP's attempts to divide the society on caste and religious lines" with the mandate.

Thanking the people of the state for expressing faith in the "people-centric" alliance, Ms Gandhi said that the "victory is special". "The victory is special and of extreme contemporary importance, and the people of Jharkhand deserve special gratitude and congratulations for summarily defeating the BJP and its divisive agenda," the 73-year-old leader said in a statement.

"With this mandate, the people have defeated BJP's attempts to divide the society on caste and religious lines," she further said.

On Monday, the JMM-led alliance had a decisive victory in Jharkhand as it won 47 seats, well ahead of the majority mark of 41 in the 81-seat assembly. The BJP, which was eyeing a second term in the state, won 25 seats - down 12 from 2014.

Chief Minister Raghubar Das stepped down on Monday evening after conceding defeat as trends suggested clear win for the alliance.

Prime Minister Narendra Modi tweeted, "I thank the people of Jharkhand for having given @BJP4India the opportunity to serve the state for many years. I also applaud the hardworking Party Karyakartas for their efforts. We will continue serving the state and raising people-centric issues in the times to come".

With the Jharkhand defeat, the BJP has lost second state after Maharashtra this year. The party suffered a string of reverses last year as the Congress wrested control of Rajasthan, Madhya Pradesh and Chhattisgarh. It lost Maharashtra this year after falling out with long-time ally Shiv Sena.