Delhi's Unforgiving Smog Proves Worst For Those With The Least

For thousands living on Delhi's streets, there was no escaping the polluted air.

With the deadly smog in Delhi becoming a public health emergency, authorities in the world's most polluted capital city responded by closing down schools and banning construction activity. But while most residents tried to stay indoors, for thousands living on streets, there is no escaping the polluted air.

Seventeen-year-old Anshu from Lakhisarai in Bihar has been living on the street outside the AIIMS hospital with her parents for the last four months. She has a hole in her heart and has to undergo surgery. Being exposed to Delhi's severely polluted air is causing her health to deteriorate.

When NDTV visited the area, the air quality index (AQI) was 239, which falls in the "poor" category.

"Due to the toxic air, I get headaches and feel dizzy. I also experience palpitations," Anshul told NDTV.

Anshul's father, a construction worker, is struggling to arrange money for her operation. Finding a place to live is not even an option for the family.

"The doctor has said we will have to pay Rs 60,000 for the operation and also provide 3 bottles of blood. We are out in the cold and have no means. We don't know for how long we will have to stay like this," Anshul's mother Usha Devi said. 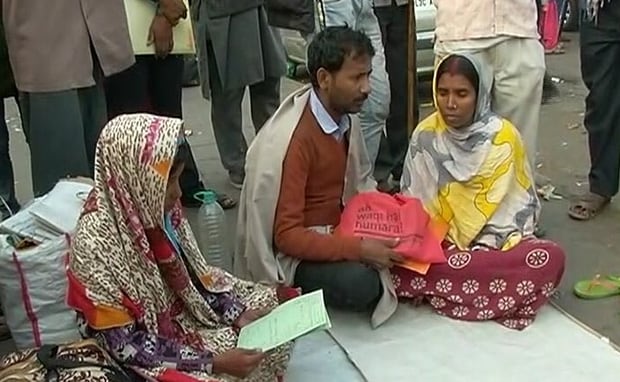 Anshul, 17, has been living outside the AIIMS hospital with her parents. She has to undergo a heart surgery.

Thirty-two-year-old Inder has been living with his wife and three kids under a flyover in Sarai Kale Khan for the last two years. The air quality in the area is in the 'very poor' category but for Inder who works as a rickshaw puller, getting a place is out of bounds. His kids keep falling sick due to pollution.

"My kids keep getting cough and cold. But everything is so expensive. How can I even think of buying any land when even the rent for one room is nearly Rs 3000," he said.

A few kilometres away, 37-year-old Prakash has been living under the Nizamuddin flyover for last seven years. He has to breathe the poisonous air throughout the day and says he has resigned to his fate.

"If the pollution has increased, what is our fault? Whatever solution has to come will come from the government or from God. Nothing is in our hands. Whether pollution increases or it rains, we have to stay here only," he said.