The Accidental Prime Minister: Anupam Kher plays the role of Manmohan Singh who ruled India for 10 years until the Congress was voted out of power in 2014. 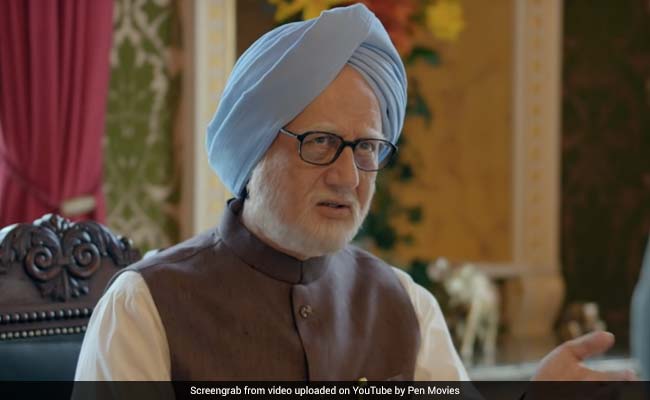 The Congress has asked for a special screening before the movie's launch on January 11.

In election season, the upcoming biopic "The Accidental Prime Minister" based on former prime minister Manmohan Singh's years in office has been caught in politics. The Congress in Maharashtra has demanded a preview of the movie that features internal party politics at the time.

Maharashtra Youth Congress president Satyajeet Tambe Patil has written to the producers of the Anupam Kher-starrer based on the book by Sanjaya Baru-- Manmohan Singh's media advisor between 2004 and 2008 -- asking for a special screening before the movie's launch on January 11.

Mr Patil says from the trailer it appears that "facts have been played with and presented in incorrect manner with regards to the ex-prime minister Manmohan Singh, UPA chairperson Sonia Gandhi and Congress party to malign the image of the party."

His letter also says if there are any "unfactual scenes" or parts that malign the Congress, "we demand that same should be edited and deleted from the movie, which can be concluded by us only after viewing the movie". If not, he warned of "other options" to stop the screening.

The trailer has been given top rating by the ruling BJP, which tweeted the clip along with its glowing review.

"Riveting tale of how a family held the country to ransom for 10 long years. Was Dr Singh just a regent who was holding on to the PM's chair till the time heir was ready? Watch the official trailer of The Accidental Prime Minister, based on an insider's account, releasing on 11 Jan!" the BJP tweeted from its official account.

The trailer shows veteran actor Anupam Kher in a very realistic portrayal of the 86-year-old who ruled India for 10 years until the Congress was voted out of power in 2014.

There are glimpses of difficult episodes in his tenure, mostly internal churnings in the Congress. In one scene, Manmohan Singh is shown as saying he wants to resign. To which, then Congress president Sonia Gandhi says: "There is one corruption scandal after another. In this situation, how can Rahul (Gandhi) take over?"

Among those who criticised the Maharashtra Congress leader for his warning was former Jammu and Kashmir chief minister Omar Abdullah.

"As much as the Congress, its branches/off-shoots and other well wishers of Dr Manmohan Singh may find the movie disagreeable, we can't talk about intolerance and then threaten to stop all screenings. Dr Singh's record & legacy won't be the product of one single movie or book," he tweeted.

Anupam Kher, whose wife Kirron Kher is a BJP lawmaker, calls the film a game-changer in political biopics.

Asked during the trailer launch if the BJP, which lost three state elections recently to the Congress, could use the film to its advantage in the campaign for the 2019 national election due by May, the actor said, "If I would have been in politics I would have definitely told them to do so. But I am an actor, they will decide."

He also said there was nothing wrong in the timing of the film's release. "People release patriotic films during Independence Day or Republic Day. This is a political film and we would like to release it in the election time. What is the problem in that?" he said.