Besides the dozen micro grid power plants that have been installed, 50 more such facilities will be established very soon. 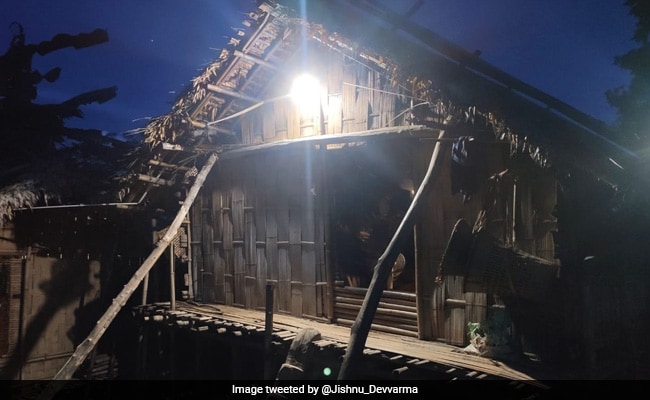 TREDA has installed 2930 solar street lights in 239 markets in 12 blocks in the state.

Lifestyle in remote tribal hamlet of Sarkhipara in Tripura's Khowai district has gone a sea change as, after remaining in the dark for 80 years, it is now shining bright with the help of solar power.

Those were unthinkable in the recent past. But, thanks to the solar power project, the duration of working time has increased, and so is the business hours, boosting rural economy.

'Haats' (village markets) are now open even after dusk while roads from the village to the market are illuminated, helping villagers to cover the distance easily.

"It is like a dream come true for us. Kerosine lamps and battery-operated flashlights were the only sources of light after dusk earlier. The village looked like a ghostly place at night. Now children can study at night; we can watch TV and recharge our mobile phones. Our life has changed," Kalaha Reang, a farmer, said.

An official said a 2 KW microgrid power plant each was installed at Sarkhipara and 11 other remote hamlets of Tripura for supplying electricity to villages in September last year. Prime Minister Narendra Modi officially inaugurated the project in a virtual programme on July 30.

Jetanjoy Reang who lives in neighbouring Nonachera village under Mungiyakami block said the solar plant has changed the lifestyle of the village, perched on the Atharamura hill range.

"Now we can make handicrafts even at night and women weave Risa and Pachhra. We can also gather together in the evening under electric light and watch TV," he said.

'Risa' is worn to cover the upper part of a woman's body while 'Pachhra' is draped around the lower part.

He said another 500 such remote villages were identified for installation of solar microgrid to serve people who are still living without electricity.

The government is embarking on an ambitious project of illuminating markets and roads in remote tribal hamlets also through solar power.

Sukla Das said the 'Grameen Bazar Alok Jyoti Scheme', partially funded by the central government, has already been implemented in certain areas and Sarkhipara is one of them.

Due to lack of light at night, remote tribal markets operate once or twice a week and only during the day. As a result, rural markets have limited business hours for selling perishable items like vegetables and fruits.

"They have no storage facility and market linkage. Sometimes, a comparatively prominent market is 15 to 20 kilometres away. So, the rural economy is suffering. After installation of solar street lights, marketing hours have been extended up to evening or night. Daily gathering and marketing activities increased manyfold and products are being sold easily," he said.

TREDA, a government organisation, has installed 2930 solar street lights in 239 markets in 12 blocks in the state.

"We have a target of installing 15,000 solar street lights in 58 remote blocks and it is expected to be completed by December this year," the TREDA official said.

Deputy Chief Minister Jishnu Dev Varma said, "As the state is hilly, many remote hamlets either have unreliable power connectivity or no electricity at all. So, off-grid solar-based microgrids are the only feasible solution to provide electricity to them." Dev Varma, who also holds the power department, said the state government will continue to electrify rural hamlets this way if it gets the backing of the Centre.

However, a government official on condition of anonymity said maintenance of the solar plants is a challenge and continuous follow-up actions are required to keep those operational.

A solar plant, which was installed in Khowai Government Hospital for supply of uninterrupted power, remained non-functional for the last five years due to lack of maintenance, he said.