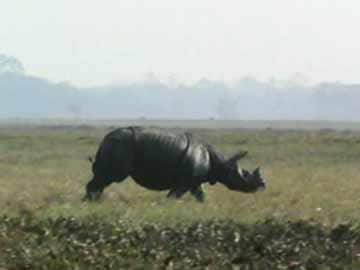 Guwahati: One person was killed when a rhinoceros which had strayed out of the Kaziranga National Park attacked him in upper Assam today.

The rhino had entered Pahumaragaon village in Majuli district. When the villagers were trying to drive it away, the rhinoceros attacked them killing one of them after lifting him off with its horn and trampling him to death, police said.

The victim was identified as Puaram Nath, police said.

Promoted
Listen to the latest songs, only on JioSaavn.com
The villagers roughed up the forest department personnel who come to the spot alleging that Nath was killed as they arrived late despite being informed several hours earlier about the movement of the rhinoceros.