Read inOther Languages
This Article is From Jul 01, 2019

Zaira Wasim announced she's quit Bollywood saying the workings of the industry "damaged my peace, imaan and my relationship with Allah." 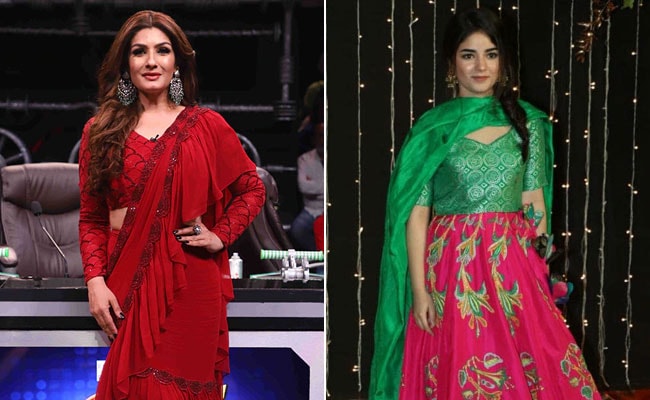 Raveena Tandon and Zaira Wasim at separate events in Mumbai.

Dangal actress Zaira Wasim's announcement that she's quitting films because of religious reasons has severely polarised opinion. Many responses have applauded her decision, others say her choice must be respected, and still others have criticised her as being regressive - actress Raveena Tandon is among the latter. "Doesn't matter if two-film olds are ungrateful to the industry that have given them all. Just wish they'd exit gracefully and keep their regressive views to themselves." In a separate tweet responding to one from AltNews founder Pratik Sinha, Ms Tandon wrote: "Exit is your choice, reason, by all means. Just do not demean it for everyone else." Raveena Tandon also described the film industry as "one where all work shoulder to shoulder, no difference in caste and religion."

Ms Randon posted a third tweet, also in response to another's, saying that she respected Zaira Wasim's decision but that it would have been 'more graceful if she hadn't condemned all as the reason for doing so.'

Doesn't matter if two film olds are ungrateful to the industry that have given them all. Just wish they'd exit gracefully and keep their regressive views to themselves .

I standby and love my industry,all the opportunities it gives to everyone. Exit is your choice,reason,by all means.Just do not demean it for everyone else.The industry where all work shoulder to shoulder,no differences,caste,religion or where you come from. #Respect#indianfilmshttps://t.co/hRJKTfI9J8

I respect her decision to quit,announce to her fans,her life,her choice.would've been more graceful if she had not condemned all as the reason for doing so.discovering spirituality is beautiful,but don't demean others.When girls in industry are wronged, I'm the first to protest. https://t.co/DV8KVU3bfi

Zaira Wasim, 18, announced on social media over the weekend that "I am not truly happy with this identity i.e my line of work" and described the workings of Bollywood as an "environment that damaged my peace, imaan and my relationship with Allah." Ms Wasim made her debut in Aamir Khan's 2016 film Dangal, for which she won the National Award for Best Supporting Actress. Her second film, Secret Superstar - also an Aamir Khan production and featuring him in a supporting role - won Ms Wasim the Filmfare Critics Award for Best Actress. Zaira Wasim has a third film in production, The Sky Is Pink, co-starring Priyanka Chopra and Farhan Akhtar.

With two critically-acclaimed films behind her and a third on its way, Zaira Wasim was considered one of Bollywood's best young talents. So her post on Saturday came as a surprise to many; in it, she explained that she was unprepared for the trappings of fame and 'public attention' and that she had 'never set out to do or become' a 'role model for the youth.'

In her post, Zaira Wasim explained she realised "that though I may fit here perfectly, I do not belong here." Acknowledging that she received "a lot of love, support, and applause," Ms Wasim also said that her choice of profession clashed with her faith: "What it also did was to lead me to a path of ignorance, as I silently and unconsciously transitioned out of imaan (faith). While I continued to work in an environment that consistently interfered with my imaan, my relationship with my religion was threatened. I discovered my lack of knowledge of the basic fundamentals of my religion and how my inability to reinforce a change earlier was a result of confusing my heart's contentment and wellbeing with strengthening and satisfying my own (shallow and worldly) desires."

In many responses to her post, Zaira Wasim has been reminded that the film industry is one in which the three biggest and most powerful stars are Muslim - Aamir, Salman and Shah Rukh Khan. Many point out that some of Bollywood's most beloved female stars have been Muslim - Waheeda Rahman, Meena Kumari, Madhubala, Nargis, Shabana Azmi, Parveen Babi, Zeenat Aman and many more. Other tweets, like Kashmir politician Omar Abdullah, simply wish Ms Wasim well.

Who are any of us to question @ZairaWasimmm's choices? It's her life to do with as she pleases. All I will do is wish her well & hope that what ever she does makes her happy.

Some reactions on Twitter remind everyone that Zaira Wasim is very young and has previously spoken about battling depression. Last year, Ms Wasim revealed that she had been diagnosed with severe anxiety and depression and that she dealt with suicidal thoughts, self-loathing and nervous breakdowns. In 2017, Zaira Wasim posted and then deleted a Facebook apology after being brutally trolled for meeting then Jammu And Kashmir Chief Minister Mehbooba Mufti. Nollywood rallied to Ms Wasim's side; her Dangal and Secret Superstar co-star Aamir Khan posted a statement of support. Anupam Kher, Javed Akhtar, Swara Bhasker and others from the film fraternity also posted messages.