No, Zaira Wasim's Account Was Not Hacked. 'Kindly Refrain From Believing Otherwise'

"This to clarify that none of my social media accounts were or are hacked and are being handled by me personally," tweeted Zaira Wasim 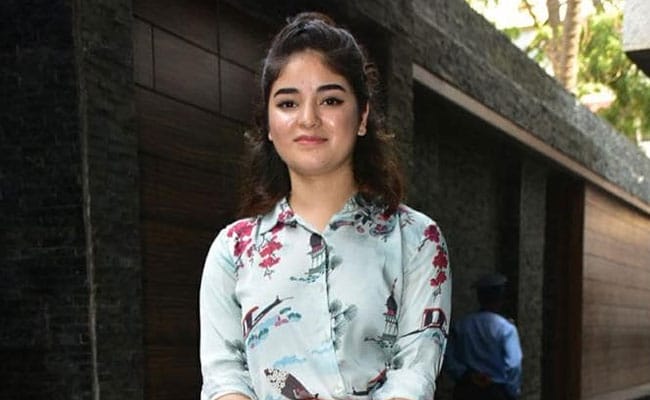 This to clarify that none of my social media accounts were or are hacked and are being handled by me personally. Kindly refrain from believing or sharing claims that state otherwise! Thanks.

Speaking to ANI earlier in the day, the actress' manager Tuhin Mishra claimed he never said the reported statements and that the post was written by Zaira Wasim. "We have never said that her account was hacked. We just said that we would definitely like to know what has happened. And the post was done by her," said Zaira Wasim's manager Tuhin Mishra. The posts - shared on Twitter, Instagram and Facebook - are still live.

Twitter wasn't buying the hacking story anyway. Politician Omar Abdullah, who was among the first to tweet saying Zaira Wasim's choice should be respected, posted this:

The dog ate my homework grows up to become my social media accounts were hacked.

Others weren't as polite:

#ZairaWasim account was hacked. I applaud the hacker for having the patience to write six friggin pages explaining WHY she was quitting acting.

Zaira's account was hacked and she didn't decide to quit bollywood for her religion!! Ok.. great.. claps.. I'm genuinely happy.

Now she is claiming that her account was hacked and she has no plan of leaving her acting career . This seems like just another public stunt for her upcoming movie . These low life celebs can stoop down to any level for attention . #ZairaWasim

Zaira Wasim has two acclaimed films to her credit - Dangal and Secret Superstar, both made by Aamir Khan - and a third - The Sky Is Pink opposite Priyanka Chopra and Farhan Akhtar - on the way. She won the National Award for Best Supporting Actress for her performance as wrestler Geeta Phogat as a young girl in Dangal. In her lengthy resignation, Ms Wasim described Bollywood as an "environment that damaged my peace, imaan and my relationship with Allah."

She also wrote: "What it also did was to lead me to a path of ignorance, as I silently and unconsciously transitioned out of imaan (faith). While I continued to work in an environment that consistently interfered with my imaan, my relationship with my religion was threatened. I discovered my lack of knowledge of the basic fundamentals of my religion and how my inability to reinforce a change earlier was a result of confusing my heart's contentment and wellbeing with strengthening and satisfying my own (shallow and worldly) desires."

Zaira Wasim's announcement has been received with praise from some quarters, tolerance from others and outright condemnation from many who criticise not her decision to quit films but her choice to link it with her religion. Actress Raveena Tandon tweeted, "Doesn't matter if two-film olds are ungrateful to the industry that have given them all. Just wish they'd exit gracefully and keep their regressive views to themselves."

Doesn't matter if two film olds are ungrateful to the industry that have given them all. Just wish they'd exit gracefully and keep their regressive views to themselves .

Zaira Wasim's brief time as a celebrity has been a fraught one. Last year, she revealed that she had been diagnosed with depression and anxiety and struggled with suicidal thoughts. In 2017, she was brutally trolled for meeting then Kashmir Chief Minister Mehbooba Mufti, after which she posted and then deleted an apology on Facebook. Bollywood colleagues, including her mentor Aamir Khan, rallied to her support.