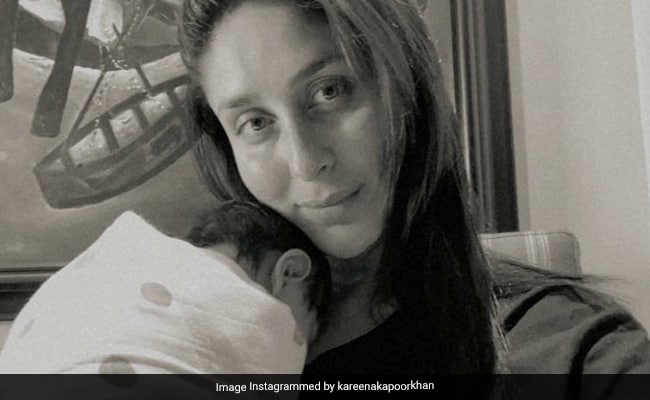 Kareena Kapoor picked the perfect day to share a photo of herself and her baby son for the first time on social media. The actress, on Women's Day, updated her Instagram feed with a grayscale picture, in which her newborn son can be seen wrapped in a piece of cloth and resting on her shoulder as she clicks a selfie. Kareena Kapoor's caption for her picture with her baby son is also winning the Internet. She wrote: "There's nothing women can't do. Happy Women's Day, my loves. #InternationalWomensDay" with read heat icons. Reacting to the actress' post, her sister-in-law Saba Ali Khan commented: "You're a rock...love you" while Kareena's sister Karisma Kapoor and her friends Amrita Arora and Natasha Poonawalla dropped red heart icons in the comments section.

Kareena Kapoor and her husband, actor Saif Ali Khan, welcomed their second child on February 21. The couple also have a son named Taimur, who is 4 years old. Kareena and Saif, after the birth of their second baby, issued a statement that read: "We have been blessed with a baby boy. Mom and baby are safe and healthy. Thank you to our well-wishers for their love and support," reported news agency PTI.

Kareena Kapoor's first post after welcoming her baby was this:

Recently, Kareena summed up her Instagram journey with this post and wrote: "Shall continue to have fun."

In terms of work, Kareena Kapoor was last seen in Angrezi Medium, which starred late actor Irrfan Khan in the lead role. Her upcoming projects are Laal Singh Chaddha, a remake of Hollywood classic Forrest Gump, and Karan Johar's Takht. Laal Singh Chaddha is slated to release on Christmas this year.