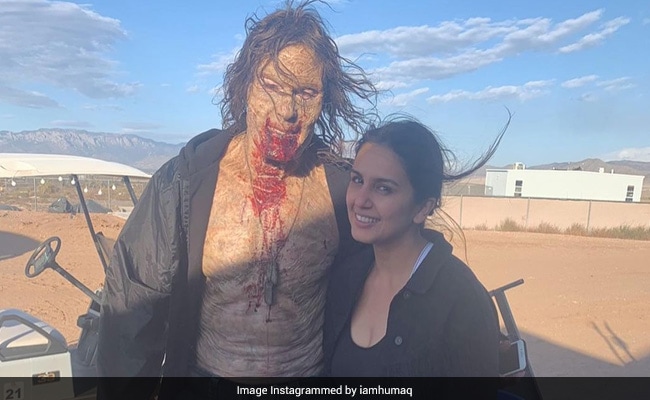 Huma Qureshi has shared a fun photo from the sets of her recent film Army Of The Dead. The actress shared a behind-the-scenes snap on Instagram featuring herself and stunt performer, Richard Cetrone. In the photo, Huma can be seen in a black T-shirt and jeans along with a black jacket. Richard, on the other hand, is seen in zombie costume and make-up. This comes as no surprise given that Army Of The Dead is a zombie heist film. While in the first photo Huma is seen smiling and posing with Richard, in the second image she is seen making a scary face. She even asks Richard to follow suit.

Along with the photo, she wrote, “Me and the super talented @stunt_batman aka Zombie King seen in happier times. Slide to see me teaching him some scary moves. Chalo darra kar dikao sabko (Come on, scare everyone)! Shabaash!" She also added hashtags such as #zombie #shootshenanigans #zacksnyder.

Recently, the actress also shared another image of herself from the sets of the film. In the picture, she is seen sitting cross-legged on the floor in a messy room.

“Me just hanging out on the set of Army Of The Dead waiting to check-in at the zombie hotel surrounded by zombie entrails. You know, just regular on set Hollywood glamour,” the caption read. She further added, “And that is Ella Purnell aka Kate hidden behind my giant shoe."

Zack Snyder has a rich repertoire of films such as Superman, Batman v Superman: Dawn of Justice, Justice League, and Legend of the Guardians: The Owls of Ga'Hoole among others.

Huma, meanwhile, made her debut in Bollywood with the two-part film, Gangs of Wasseypur. She has appeared in several successful films including Dedh Ishqiya and Badlapur. She will be seen next in Bell Bottom, which features Akshay Kumar in the lead role.