Ananya Panday posted a throwback picture with a fan 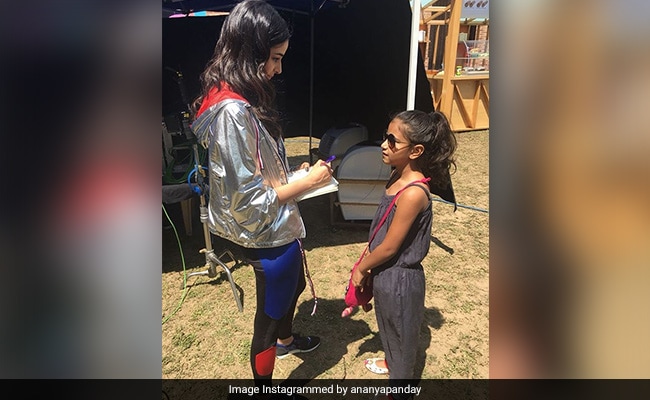 Ananya Panday, who recently made her Bollywood debut in Student Of The Year 2, with a lot of excitement posted on Instagram about the very first time a fan asked her for an autograph. She posted a picture with her little fan, who had asked her to sign an autograph for her. Sharing the throwback photo she expressed that how excited was she to sign the autograph and also that she was more excited than her fan. She Instagrammed the picture with the caption: "This was the first time someone took my autograph! I think I was way more excited than her. Throwback to the first day of shoot. Have you watched SOTY 2 yet? " Celebrities like Manish Malhotra, Punit Malhotra and Aditya Seal commented on her photo calling it 'cute.'

Take a look at the adorable picture she posted:

This was the first time someone took my autograph!!! I think I was way more excited than her throwback to the first day of shoot Have you watched SOTY 2 yet?? Book ur tickets now!!! (Link in my bio)

Ananya Panday is the daughter of actor Chunky Panday and Bhawna Panday. She is a fresher as an actor due to which, she was overwhelmed to witness such a moment. The picture is from the sets of Student Of The Year 2. The actress came across a lot of first experiences during the shoot for the film and she had shared few of those moments on the Instagram before. One of such moments, which she had posted earlier is when she met Alia Bhatt in the film set and had a total fan girl moment. She Instagrammed a picture with Alia and wrote: "Team Shanaya' for life. The hottest 'Hook Up song' ever featuring my two favorites - Alia and Tiger."

Ananya had posted several pictures on her Instagram sharing her journey from the sets of Student Of The Year 2 Here are some of her fun posts you should have a look at:

the real behind-the scenes of The Jawaani Song #SOTY2 (link in my bio!!!)

Ananya Panday who marks her debut in Student Of The Year 2, released on May 10. The film also features Tara Sutaria and Tiger Shroff. The story is about the life of college students, which is played by Ananya, Tiger and Tara. The film is the second in the series of Student Of The Year films, the first part of which was directed by Karan Johar. The 2012 film marked the Bollywood debuts of Alia Bhatt, Varun Dhawan and Sidharth Malhotra.

student of the year 2ananya panday